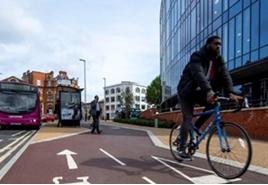 Leicester City Council has won £33 million of Government funding to improve public transport, cycling and walking across the city.

The council was awarded the money following a successful bid for the Government’s Transforming City Fund.

The Government grant will help fund an overall package of works expected to be around £65m once match funding from the city council and other partners is included.

The money will fund a series of projects to  improve the journey times and reliability of the city’s bus services, and extend the council’s Connecting Leicester cycling and walking routes into city neighbourhoods.

Schemes include creating Green Growth Bus Priority Corridors linking to city neighbourhoods and suburbs, and continuing to develop a network of cycling and walking routes throughout the city.

The £33m grant includes £8m for sustainable transport improvements between St Margaret’s Bus Station and the Park and Ride hub at Birstall, including creating new bus lanes and cycle infrastructure.

The programme has been developed with Leicestershire County Council, universities and local businesses. Bus operators have been central to the bid and have committed “substantial funds” to schemes.

The announcement builds on over £100m investment the city council has made through its ongoing Connecting Leicester programme to support cycling, walking and bus travel.

It follows on from the city council’s successful bid which secured nearly £8m in 2019 from the Department for Transport in its first round of Transforming City Funds funding.

The announcement means the combined Government and local match funding for TCF phase one and two totals around £75m.

Cllr Adam Clarke, deputy city mayor for environment and transportation, said: “The DfT funding announcement, and funding from partners, represents a big step forward for the city to provide attractive, sustainable travel choices for people, while supporting our climate emergency and air quality challenges and encouraging healthier lifestyles through walking and cycling.

“We look forward to delivering the proposed public transport schemes developed through our quality partnership work with bus operators. We are also very grateful for all the hard work done in putting together this funding bid.”

Other schemes due to receive Government funding include £20million for the East Midlands Rail Hub, to upgrade and improve connections between towns and cities across the Midlands including Leicester and Birmingham, £500million on major strategic road schemes between 2020-25, including improvements to the M1 to better link Leicester and Nottingham, and £56million additional funding for local road maintenance and fixing potholes.

Bath and North East Somerset Council has cut 11.7 tonnes of CO2 emissions in two and a half years as a result of its electric vehicle car sharing initiative.

Innisfil in Ontario has teamed up with Uber to offer residents flat rate rides to popular destinations.