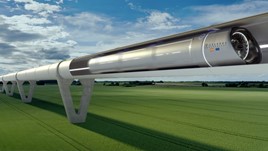 Spanish hyperloop start-up Zeleros has completed a financing round worth more than €7 million (£6.24m) to help fund its next phase of development in Europe.

Hyperloop is described as the “fifth mode of transport” and uses a sealed tube or system of tubes with low air pressure through which pods can travel substantially free of air resistance or friction at speeds of up to 760mph.

Connections like Paris to Berlin could be reduced to less than an hour.

London to Manchester travel times could be cut down to 18 minutes.

Zeleros has opened this new stage of development thanks to the support of companies such as Altran, Grupo Red Eléctrica and also strategic investors at national and international level, including among others Goldacre Ventures (United Kingdom), Road Ventures (Switzerland), Plug and Play (USA), and the Spanish Angels Capital and MBHA.

The funds will be used to further develop Zeleros’ hyperloop vehicle and its core technologies, which are being positioned to cover routes between 400 and 1,500 kilometers in distance.

David Pistoni, chief executive at Zeleros, said: “For Zeleros it is key to have partners of this relevance and expertise onboard.

“Their support will accelerate the development of our technologies, unlocking the path towards hyperloop-based routes and corridors in Europe and worldwide.”

She said: “With technologies like hyperloop we are changing the future of mobility.

"Altran has been collaborating with Zeleros since 2017 and will now contribute all of its experience and multidisciplinary talent to help the company accelerate the development of hyperloop technology.”

The next steps will be the the deployment of the European Hyperloop Development Centre in Spain, including a 3-km test-track to demonstrate the effectiveness of its technologies at high speed.

The aim of the project is to accelerate the development of the hyperloop industry in Europe, by creating an ecosystem of international industrial, technological and institutional partners.

Pistoni said: “Hyperloop is a great development that requires the participation of first-class players and that is why from the beginning we decided to approach our project by creating a collaborative ecosystem.”

Earlier this year, the UK announced plans to bring forward the ban on the product of new diesel and petrol cars to 2035. But urgent measures like this one are necessary.

Three areas of England have been given DfT blessing to experiment with differing forms of transport. Their findings could have major implications for us all

A combination of Hyperloop, air taxis, and suborbital rockets could enable a traveller to reach any location on earth in 60 minutes, according to new research from consultants Frost & Sullivan.