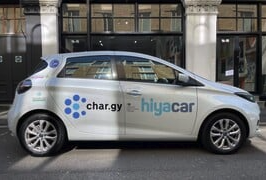 The trial will use 10 Renault Zoe battery electric vehicles and is a collaborative effort between Buckinghamshire Council, Milton Keynes Council, London Borough of Redbridge, the University of Warwick, the Open University, IPT Technology, and additional support from Hiyacar.

Funding has come from the Office for Zero Emission Vehicles (OZEV) and Innovate UK.

Char.gy, which has developed the wireless technology with IPT Technology, hopes the trial will pave the way for the future of urban wireless EV charging.

It says the new charging solution will mean that in the near future, those without access to private charging via garages, driveways or other off-street parking options will be able to charge their vehicles efficiently and cable-free.

How does wireless EV charging work?

Char.gy’s wireless charging works via an electrical induction charging pad installed in the ground. In the trial this is fitted in a dedicated parking spot in Liston Road car park.

Existing EVs do not have wireless charging capabilities built in, the 10 Hiyacar Zoes have been fitted with an aftermarket induction charging kit. They can be booked through the Hiyacar app.

Nine additional trials will take place in other locations around Buckinghamshire, as well as Milton Keynes.

Drivers who rent an EV during the trial will be contacted by the Open University for their feedback on their experience to gauge the success of this charging solution from the drivers’ perspectives.

Other trials of wireless charging technology are also taking place in the UK.

In another OZEV-funded project, nine electric taxis with take part in a trial in Nottingham. They will be available on the city’s streets for hail by the general public as they capture data, including journey distances and battery level.

All the vehicles will be adorned in a new green and blue livery to promote the WiCET (Wireless Charging of Electric Taxis) branding.

Another OZEV funded wireless electric van charging trial has been operation with the City of Edinburgh Council, Heriot-Watt University and Flexible Power Systems (FPS) since earlier this year.

The project team says that high-powered wireless electric vehicle charging is expected to have considerable benefits for commercial vehicle users, including: faster starts to charging sessions with no downtime for plugging in to improve vehicle use and create bigger benefits from opportunity charging sessions; no cables to cause trip hazards or require maintenance; and future proofing for the advent of autonomous vehicles (which will not have a driver to plug them in).

Sprint Power has been awarded funding from the UK government to develop wireless charging modules for taxis.

Witricity, the wireless charging company, has raised £29 million in venture capital funding to help with the commercial rollout of its technology.