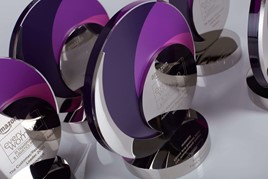 The winners of this year's Amazon Everywoman in Transport and Logistics Awards have been announced.

The awards, which took place online this year, recognised 16 outstanding individuals working in the transport and logistics sector, championing their achievements and showcasing them as inspiring role models to the next generation of female talent.

The winners encompassed a range of career experiences, “revealing the breadth of opportunities available for women in an industry often associated with men”, Everywoman said.

Alison Wynne Davis, general manager at Gist, scooped the Supply Chain Leader Award, while Kathy Cooke, head of operations at Wincanton was named the winner of the Supply Chain Above and Beyond Award.

The Above and Beyond Award celebrates a woman that has 'gone above and beyond' her role to help drive the organisation's success. It is awarded to a woman at any stage of her career, in recognition of her commitment to going the ‘extra mile’.

The Leader Award celebrates a woman operating in a senior role within her organisation. She will be making a significant contribution to the strategic direction of the business.

Sheeren Husein, head of Linehaul at DPD Group UK, took the Freight Leader Award and Danielle Owen, head of marketing and communications at EV Cargo claimed the Freight Above and Beyond Award.

For the first time, the awards introduced the ‘Tech Innovator Award’ to celebrate a woman designing, developing, researching, implementing or being 'exceptionally creative' with technology within the sector.

This was awarded to Kate Lovatt, IT director at EV Cargo who spearheaded her company’s technology Trident, which increased freight handled by its smart forklift trucks by 24%.

She also devised technology to keep the company moving during lockdown, while minimising face-to-face contact.

Woman of the Year Award winner

The highly coveted ‘Woman of the Year Award’ was presented to Jaya Sajnani, director, and transport manager at YG Travel, which offers transport solutions for weddings, corporate events, schools and educational tours.

The judges said they were impressed by her entrepreneurial story, which saw Sajnani leave her small town in India to study finance in the UK, before setting up her own business in 2018 with one minibus.

Under her leadership the company has grown, and she now employs 15 drivers. Sajnani was also singled out for her dedication to supporting other women via a non-profit platform she created to help women start their own business.

Maxine Benson MBE, co-founder of Everywoman, said: “We are delighted to announce the winners of the 2021 Amazon everywoman in Transport and Logistics Awards.

“The events of the past 18 months have heaped unprecedented pressure on our vital transport and logistics sector, but it has risen to the challenge keeping the country, its people, goods and services moving, even as we have undergone seismic change.

“This is in no small part thanks the skill, leadership, passion and dedication of its female workforce and we feel honoured to recognise them and celebrate their achievements.”

Graham Allison, Amazon regional director, said: “I was delighted to be part of the judging panel and hear all the amazing stories from the extraordinary women who over the last year, have worked tirelessly to keep Britain moving at a time when customers have needed this industry more than ever.

“As a company it is important to us to inspire women to continue to drive innovation and new ways of thinking and to develop fulfilling careers by providing opportunities for all.

“I would like to congratulate all the worthy winners who truly showcase the exceptional female talent we have in the transport and logistics industry.”

Other 2021 Amazon Everywoman in Transport and Logistics Awards winners:

Above and Beyond - Paula Jones, city centre supervisor at Brighton & Hove and Metrobus, from Hove

Above and Beyond - Charlotte Robinson, planner at Dyer & Butler, from London

The Warehousing Award – sponsored by FedEx

Above and Beyond - Laura Morrison, general manager, at Wincanton, from Corby

The Apprentice of the Year Award – sponsored by Unipart Rail

The finalists for the 2021 Amazon Everywoman in Transport & Logistics Awards have been announced.