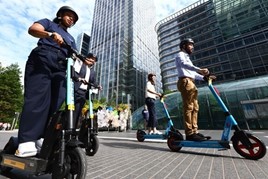 London's rental e-scooter trial has expanded to Westminster, with the number of e-scooters involved in the trial set to rise to 2,700 in the next few weeks.

TfL and London Councils launched a trial of rental e-scooters in the capital in June, following the Government’s decision to legalise rental trials of e-scooters.

Data collected from the trial shows that 35,000 trips were made on e-scooters during the first four weeks of the trial, with the average rental lasting 24 minutes over an average distance of 2.9km.

The City of London, Lambeth and Southwark joining the trial in July and the expansion of the trial to Westminster this week means that e-scooters can be hired and used in a wider area of central and inner London.

TfL and London Councils said that they are continuing discussions with boroughs about further expansions over the coming months.

Will Norman, London's walking and cycling commissioner, said: "I’m pleased that Westminster have joined the e-scooter trial and will be working closely with TfL to roll them out.

"E-scooters have been on our streets for some time now but with very little regulation.

"This trial has safety at its heart, bringing in rigorous precautions and parking measures while taking the needs of all road users into account and seeing what role e-scooters can play in London's future.

"As we look to our capital's future, we want to ensure a green and sustainable recovery from the pandemic.

"We know that a huge portion of car journeys in London are for very short distances, and we want to explore how e-scooters can act as an innovative alternative.”

E-scooter operator Tier has suggested that if the trial reaches full capacity e-scooters could replace five million car trips in London annually, based on assessing usage data from operations across 115 cities in the UK and wider Europe.

However, e-scooters have caused concerns for safety and disability groups due to their misuse and the serious injuries, and even deaths, involving e-scooters.

TfL said that the rental e-scooters have a number of safety features including always-on lights, GPS controlled parking and no-go zones - meaning they can only be parked in specified locations not obstructing the pavement and cannot be taken in certain areas, such as tunnels - and a unique identification number on every vehicle.

The safety standards required in London go further than those set out at a national level, including:

The operators have additional safety mechanisms in place, including 'first ride policies', meaning riders must take an e-learning safety course before they hire for the first time, lower maximum speeds in place for their first ride, and in-app features designed to prevent use while under the influence of alcohol.

TfL, London Councils and the operators also launched a safety and awareness campaign to promote the importance of safety during the trial.

TfL, London Councils and participating boroughs said that they have "actively engaged" with people with accessibility needs throughout the development of the trial and will continue to do so as the trial continues, including with TfL’s Independent Disability Advisory Group.

This includes proactively engaging with the blind and partially sighted community and encouraging each operator to work with the community to find an appropriate sound for e-scooters to alert people to their presence on the street.

TfL said that the trial is being regularly monitored and reviewed to make sure it is safe for everyone and changes will be made to its operation wherever improvements are identified.

While the Department of Transport will ultimately make any decisions on future e-scooter policy, data shared by the operators will play an important role in helping to shape London and the UK's future policy on e-scooters, TfL said.

TfL has installed a micro-mobility data sharing platform which allows for two-way data sharing with the operators and helps with the day-to-day management of the trial.

Neil Peachey, TfL's senior business architect, discussed how TfL was using data from the trial at the Virtual Smart Transport Conference. You can view his presentation by signing-up for access to the on-demand service here.

Those who have already registered for the event simply need to log on to the Smart Transport Conference website to watch any of the sessions again.

E-scooters have replaced an estimated 370,000 car trips and saved 200 tonnes of CO2 emissions in the West of England, according to operator Voi.