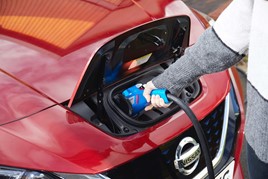 During peak times of the day when more electricity is used in people’s homes, more electricity has to be generated, and traditionally this has required the burning of fossil fuels from power stations, which negatively impacts the environment.

This issue could be resolved through the development of a nationwide network of batteries, which store electricity generated from renewable sources at non-peak times, then feed back power to the grid at peak times.

The batteries in electric vehicles (EVs) have the potential to deliver the nationwide storage necessary to achieve the solution, and WPD is trialling how such a system could work through its Electric Nation project.

The project is in partnership with CrowdCharge and is recruiting 100 Nissan EV owners in the Midlands, South West England and South Wales to take part.

Roger Hey, WPD’s DSO Systems and projects manager, trialled V2G charging before EV drivers were invited to take part in the Electric Nation project, and, although an electrical engineer himself, he was amazed to see how much energy an EV battery could store.

Hey said: “One of the latest Nissan Leafs with a 62 kWh battery would be able to put energy back into the grid that would be the equivalent of powering a house for days.

“Multiply this by millions of EVs across the UK and there is the potential for huge storage which can mitigate the peaks in electricity demand. And people could be rewarded for offering their EVs as a service to the grid.”

Hey sees V2G as a huge opportunity to reduce the extent, and therefore the cost, of upgrades to the electricity network and the building of new electricity generation.

Currently, only Nissan EVs can be used for V2G charging due to their CHAdeMO technology.

The majority of EVs have the CCS charging system, which is due to be V2G compatible by 2025. From that point V2G should be possible for all EVs.

WPD has a system to constantly forecast the growth of EVs – not just on a national level, but down to individual postcodes.

Three million EVs in the region by 2030

Currently serving around nine million customers, the network operator predicts that there may be up to three million EVs in its area in the South West, South Wales and Midlands by 2030, with 217,000 chargers connected to the network by 2023.

A tool has also been created by WPD and EA Technology which will assess the impact of EVs on local low voltage (LV) networks.

Developed as part of the original Electric Nation smart charging project, this shows where networks are becoming constrained as a result of local clusters of EVs, and will help to highlight where proactive reinforcement can help to avoid network constraints, in particular due to EV connections.

WPD is working with a wide range of organisations including local authorities, house builders and fuel station operators to facilitate the installation of more charge points, including at EV filling stations/charging hubs, and through on-street charging solutions for the 40% of homes that don’t have off-street parking.

For those who can charge at home, a project in Wales is feeding higher capacity three-phase electricity to domestic properties.

Although homes already have three-phase electricity in Germany and Norway, in the UK this is typically only the case at commercial premises.

The Electric Nation Vehicle to Grid project is currently offering the free installation of V2G smart chargers worth £5,500 to Nissan EV drivers who live in the Midlands, South West and South Wales.

Over 300 EV drivers have applied to join Electric Nation so far, however recruitment remains open to ensure the project secures 100 participants that meet all the eligibility criteria.

Electric Nation is different to other V2G projects because it is using up to five different energy suppliers instead of just one.

It said this means that the trial is a more realistic simulation of a future world in which many streets will have a number of EVs using V2G chargers operated by different energy suppliers.

In the Electric Nation V2G trial, each supplier will use their charger groups to test their various energy services utilising CrowdCharge’s demand management platform, which provides optimised charging sessions.

The V2G trial follows the first Electric Nation project from 2018/19 which at the time was the world’s largest EV smart charging trial, providing real life insight into people’s habits when charging their vehicle.

The trial provided data from more than two million hours of car charging, revealing the user habits on timings of charge, where and for how long, as well as the impact of different tariffs.

By plugging in at specified times and putting energy back into the grid, active participants of the Electric Nation Vehicle to Grid project are expected to earn a minimum reward up to the monetary value of £120, available over the one-year trial period from March 2021 to March 2022.

UK in top 10 most expensive countries for home charging EVs

A new study by Uswitch has shown that the UK is in the top 10 most expensive countries for home charging electric vehicles (EV), at an average cost of £310 a year.