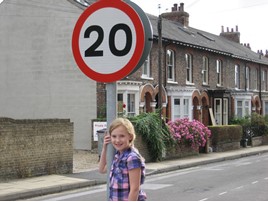 The Welsh Government is introducing the new speed limit to improve safety and help make Welsh streets a more welcoming place for cyclists and pedestrians.

The trials will have a phased start from this summer until the end of the year and will help develop enforcement arrangements, as well as communicating " the value of the new speed limit", the Welsh Government said.

Initial findings from a national public attitude survey have found support for the plans with 92% of those who wanted a change to the speed limit on their street suggesting a speed limit of 20mph or lower, and 77% wanting this speed limit to be applied throughout the area in which they live.

Lee Waters, Deputy Minister for Economy and Transport, said: “Making 20mph the default speed limit in residential areas is a bold step that will save lives.

“We have made progress on reducing deaths and serious injuries on our roads over the 21 years of devolution, but despite our considerable efforts the highest proportion of all casualties - 50% - occurred on 30mph roads during 2018.

"This cannot be tolerated, so a reduction to 20mph on our residential and other busy pedestrian urban roads has to be the way forward.

“Decreasing speeds reduces accidents and saves lives, and alongside this the quality of life will improve, making room on our streets for safer active travel.

"This helps reduce our environmental impact and has a positive outcome for our physical and mental wellbeing.”