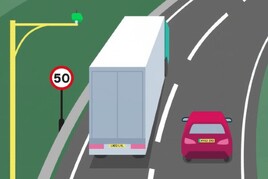 Motorists exceeding the 50mph speed limit on some of the most polluted roads in Wales could be fined from next Monday (October 4), the Welsh Government has warned.

The roads which are affected by the 50mph speed restrictions and enforcement measure include:

The level of nitrogen dioxide in affected areas has reduced by up to 47% since the limits were introduced, although the lower traffic flow as a result of the Covid-19 pandemic is seen as the primary reason for concentrations of nitrogen dioxide at all five locations  generally remaining below the legal limit of 40µg/m³.

Now that traffic flows have started to return to pre-pandemic levels the Welsh Government hopes that better compliance with the speed limit will maintain the "positive improvements" in air quality at all five locations.

Lee Waters, deputy minister for climate change, who has a responsibility for transport, said: “We've made significant progress in bringing emissions levels down in recent years, but we now have to go further and faster.

“We know that slower speed limits are not a popular choice, but we need to do things differently and be bold if we are to stand a chance of tackling climate change.

“It’s clear that the speed restrictions we’ve introduced on our most polluted roads are working - the results speak for themselves – but compliance with these limits is essential if we are to achieve the reductions we need to make in the shortest possible time.

“We need to act now to make Wales a safe place to live with clean air for everyone.”

South Wales Police, roads policing lead for Wales, assistant chief constable, Mark Travis added: “The implementation of the 50mph speed limits, for environmental reasons, on some of Wales’s busiest roads is an important issue to tackle pollution and to give Wales and its communities a cleaner and healthier future.

“All four Welsh Forces are supporting its implementation, with the enforcement of these speed limits approached in a consistent, proportionate and transparent manner.”

Plans to reduce the national speed limit in Wales

Plans to reduce the national speed limit in Wales on residential roads and pedestrian streets will form part of the Welsh Government’s legislative priorities.