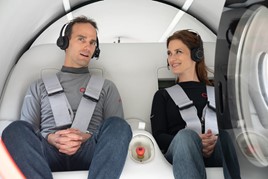 Virgin Hyperloop has completed its first test run with passengers at its Nevada test track.

Hyperloop is described as the “fifth mode of transport” and uses a sealed tube or system of tubes with low air pressure through which pods can travel substantially free of air resistance or friction at speeds of up to 760mph.

Connections like Paris to Berlin could be reduced to less than an hour.

London to Manchester travel times could be cut down to 18 minutes.

Josh Giegel, co-founder and chief technology officer and Sara Luchian, director of passenger experience, were the first people in the world to ride Hyperloop’s 500 meter DevLoop test site in Las Vegas, where the company has previously run over 400 un-occupied tests.

The occupants made their maiden voyage on the newly-unveiled XP-2 vehicle, designed by BIG – Bjarke Ingels Group and Kilo Design, which was custom-built "with occupant safety and comfort in mind".

While the production vehicle will be larger and seat up to 28 passengers, the two-seater XP-2 vehicle was built to demonstrate that passengers can in fact safely travel in a hyperloop vehicle.

The testing campaign has been overseen by Certifer, an Independent Safety Assessor (ISA) and the XP-2 test pod was equipped with a control system that can rapidly trigger appropriate emergency responses of needed.

Jay Walder, Virgin Hyperloop chief executive, said: “I can’t tell you how often I get asked ‘is hyperloop safe?

“With this passenger testing, we have successfully answered this question, demonstrating that not only can Virgin Hyperloop safely put a person in a pod in a vacuum environment, but that the company has a thoughtful approach to safety which has been validated by an independent third party.”

A consortium of businesses have come together to use Virgin Media’s existing telecoms infrastructure to boost on-street electric vehicle charging in the UK.

Spanish hyperloop start-up Zeleros has completed a financing round worth more than €7 million (£6.24m) to help fund its next phase of development.

High Speed Two (HS2) has launched a public consultation on plans for its western leg between Crewe and Manchester and links with Northern Powerhouse Rail (NPR).