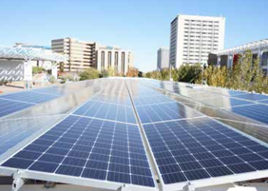 The amount of solar power installed in just seven cities in the US over the last decade has exceeded the amount across all cities across the country previously up until 2010, according to a new report.

The Environment America Research & Policy Center and Frontier Group surveyed 57 cities in its seventh edition of its annual Shining Cities 2020 report and almost 90% have more than doubled their total installed solar PV capacity between 2013 and 2019.

Environment America said that to continue America’s progress toward renewable energy, cities, states and the federal government should all adopt strong policies that encourage homeowners, businesses and utilities to “go solar.”

All of the “Solar Stars” have experienced dramatic growth in solar energy and are setting the pace nationally for solar energy development.

Los Angeles has added more than 215 MW of solar capacity since year-end 2016.

"|The United States now has 77.7 gigawatts (GW) of solar photovoltaic (PV) capacity installed – more than enough to power one in every 10 homes in America.

"Hundreds of thousands of Americans have invested in solar energy and millions more are ready to join them. America’s major cities have played a key role in the clean energy revolution and stand to reap tremendous benefits from solar energy.

DSM and Lightyear to make solar roofs for EVs

High-tech mobility innovator Lightyear and Royal DSM are working together to accelerate the production of a solar-powered roof for the electric vehicle market.

A project aiming to revolutionise the way energy is generated, stored, shared and consumed is under way in West Sussex.