US states to connect blue light services and traffic infrastructure 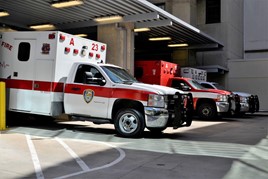 The two companies are carrying out what it calls “the first dual-mode/dual-active V2X deployment”, in which Autotalks’ chipsets are installed in roadside units such as traffic lights in Georgia, Texas and Hawaii

Autotalks, which specializes in V2X communication solutions, is working with Atlanta-based intelligent transportation infrastructure provider Applied Information, in an effort to help save lives by using traffic light signal preemption and increasing the efficiency with which ambulances and fire engines can move through traffic.

Alpharetta, a city in Georgia, will be the first site to roll out the traffic signal preemption at 150 locations.

This technology transfers the normal operation of the traffic control signal to a mode of operation which gives the right of way to emergency vehicles such as ambulances and fire brigade vehicles, while all other traffic is brought to a halt.

The deployment is expected to expand to include other use cases beyond emergency vehicles, such as transit bus priority, red light running alerts and “get ready for green” message to make traffic move more safely and efficiently through signalized intersections.

Applied Information has signed similar agreements in Texas and Hawaii, where the two companies are cooperating in similar deployments.

The iATL is a private-sector facility for developing connected vehicle applications for both vehicles and traffic control devices such as traffic signals.

As the proportion of connected vehicles in UK roads increases, drivers are at increased risk of keyless vehicle theft or theft of personal data.

The Government has announced a combined £400 million boost from the public and private sectors to help fund autonomous, electric and connected vehicle projects.