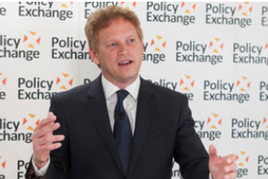 The Government has said it will “level up” bus and rail transport infrastructure across the Midlands, the North and across England with £401 million in upgrades.

The £317m will be used to to help fund the Transpennine route upgrades to boost punctuality, reliability and connectivity for passengers between York, Leeds and Manchester. There will be £69m in improvements to increase freight capacity between the Port of Southampton and the Midlands.

New stations at Marsh Barton in Exeter, as well as White Rose and Thorpe Park in Leeds will also be built with £15m from the New Stations Fund.

Shapps said: “Every part of the country, unleashed from the restraints of outdated public infrastructure, thereby matching the south-east’s productivity… well, that would make the UK the biggest economy in Europe by 2050.”

Shapps' speech follows on from £401m of investment for “faster, greener and more reliable rail services” and one week after the Government launched Great British Railways as the new public service body to own the tracks and direct train operators.

He added: “I know some people think demand for rail and bus travel will never fully recover.

“Videoconferencing, they argue, is now embedded as the way we do business. But I think that prediction will quickly be overtaken by reality, as our economy bounces back …

“A more productive economy is a busier one, creating new reasons to travel. It might not always be for the same reasons, or at the same times as before. But people need – and like – to travel.”

This Chartered Institute of Logistics and Transport’s (CILT) report shows how bus patronage has declined and suggests how demand could be brought back.

The Williams-Shapps Plan for Rail

This whitepaper by the Department for Transport (DfT) sets out the Government's plan to transform the railways in Great Britain.

Government plans for England’s buses gain support, but questions are raised over the ability of local authorities to comply with proposed timescales