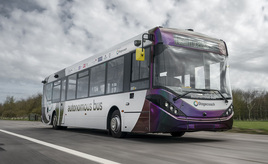 Live testing of the UK's first full-sized autonomous bus will start on Scottish roads from this week.

Public transport giant Stagecoach, in partnership with autonomous vehicle systems manufacturer Fusion Processing, bus and coach manufacturer Alexander Dennis and Transport Scotland, will test the autonomous bus over the next two weeks, in preparation for the launch of the CAVForth pilot service in late summer.

The pilot will see five single-deck autonomous buses operating at SAE Level 4 over the Forth Road Bridge between Ferrytoll Park and Ride in Fife and the Edinburgh Park Train and Tram interchange. The buses will provide a service capable of carrying up to 36 passengers over the 14 miles across the bridge, with capacity for over 10,000 passengers a week, though during testing, no passengers will be on board.

Sam Greer, regional director for Stagecoach in Scotland, said: "This is a hugely exciting project for Scotland and we are pleased to be starting live testing on roads today. This is a major step forward in our journey to fully launch the UK’s first full-sized autonomous bus service and will provide easy access to a brand-new bus route in the heart of East Scotland."

As part of project CAVForth, around 500 members of the public provided feedback on what would make them feel comfortable and confident in travelling. Built on the feedback received, the partners involved say they have developed a vision for the new autonomous vehicles, which includes making sure future autonomous bus services still have a member of staff on board.

When the service goes live, experienced bus drivers will monitor the autonomous system alongside a bus ‘captain’ who will talk to passengers about the service and answer any questions they may have, demonstrating what a future service might feel like when the staff member is able to leave the cab while the computer does the driving.