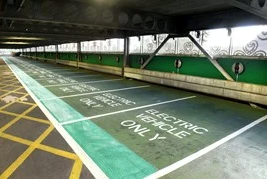 Railway stations in Hatfield and Norton have opened electric vehicle charging hubs with the help of Pod Point and RAW.

The installation at Hatfield station marks a milestone in a wide-ranging station improvements programme being undertaken by Govia Thameslink Railway, which encompasses more than 230 stations and over 1,000 individual projects.

In partnership with Pod Point, Hatfield’s new hub has been opened to meet the increasing consumer demand for electric vehicles, while also demonstrating the company’s commitment to sustainability.

The EV installation at Hatfield – which sees a 150% in public EV charging devices in the Welwyn Hatfield district – will provide additional accessibility and convenience for customers using the Great Northern and Thameslink station.

As part of the project, 12 charging points have also been installed at Haywards Heath station.

Shapps said: “We’re taking great strides towards our goal of having one of the best electric vehicle infrastructure networks in the world.

“This means a network for current and future electric vehicle drivers that is affordable, reliable, accessible and secure.

“Today’s landmark announcement ticks all those boxes and will make journeys on road and rail much greener for local residents, commuters and businesses.”

The Worcestershire Parkway station was opened to increase connectivity to London, the Midlands and South Wales and is the county’s first new railway station for more than 100 years.

Neil Broadbank, key account manager at RAW, said: “We approached the project two-fold: initially by installing a larger number of charging points to meet future demand, rather than installing on a reactive basis; and secondly, configuring and trialling the combination of several different pricing and access structures on the ChargePoint platform.

“For example, we have looked at standard per kWh fees, combined with parking fees, flat rates or connection fees for extended periods of time; and different rates for customers, different groups of chargers on site, and lots of other options, all of which can be run simultaneously and changed or scheduled remotely.

Using the same EV charging platform that is tried and tested by some of the world’s largest organisations provided GWR with the comfort that this new ‘critical infrastructure’ operated without a hitch from the start.”

In another project, Swarco eVolt has installed six charging stations at a new charging hub at Strathclyde Country Park, just outside Glasgow, for Project PACE.

It is being facilitated by North and South Lanarkshire Councils which will benefit from Transport Scotland’s £5.3m funding and receive 40 new charging hubs by April 2021, starting with Strathclyde Country Park.

The charge points will be supplied, installed and maintained by Swarco eVolt under a framework agreement that was awarded in July.

Justin Meyer, general manager of Swarco eVolt, said: “From a driver’s perspective, the network of charging hubs will provide multiple charge points at each well-chosen location, including our rapid chargers.

“This will provide better access to charging with less waiting time, which in turn radically improves the customer experience and enjoyment of driving an EV.”

Zap-Map will roll out a single app that electric vehicle drivers can use to pay for charging across different networks next year.

Lack of charging infrastructure is an EV roadblock, says LeasePlan

LeasePlan has said a lack of sufficient charging infrastructure globally is a major roadblock for the mass adoption of electric vehicles.

ABB has been selected by Gridserve to supply the high power electric vehicle (EV) charging infrastructure at its first Electric Forecourt in Braintree, Essex.