UK demand for EVs up 184.3% during difficult September 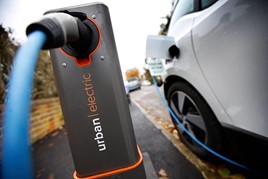 Strong demand for electric and plug-in vehicles couldn't stop a poor result for the UK's new car industry in what is usually the second busiest month of the year.

Battery electric and plug-in hybrid car uptake grew substantially to account for more than one in 10 registrations in September as new models continue to increase consumer choice, according to the latest data from the Society of Motor Manufacturers and Traders (SMMT).

Demand for battery electric vehicles (BEVs) increased by 184.3% compared with September last year, with the month accounting for a third of all 2020’s BEV registrations.

The SMMT said that even with this growth, however, meeting accelerated ambitions for uptake of these vehicles "will require government to get behind a truly world-class package of incentives – alongside binding targets on infrastructure to reassure consumers that recharging will be as easy as re-filling".

The total new car market fell by 4.4% in September to 328,041 units registered – the lowest September volume recorded since 1999.

Private registrations fell by -1.1% over the month. Demand from business was also muted, with around 10,000 fewer cars joining larger fleets, representing a -5.8% decline.

Mike Hawes, SMMT chief executive, said: "During a torrid year, the automotive industry has demonstrated incredible resilience, but this is not a recovery. Despite the boost of a new registration plate, new model introductions and attractive offers, this is still the poorest September since the two-plate system was introduced in 1999.

"Unless the pandemic is controlled and economy-wide consumer and business confidence rebuilt, the short-term future looks very challenging indeed."

Michael Woodward, UK automotive lead at Deloitte, said the increase in plug-in vehicle demand was not only driven by environmental credentials of EVs, but also an abundance of new models entering the market alongside financially attractive tax changes.

He said: “With EV sales revving up, the pressure is now on the UK’s charging infrastructure to keep up, with capacity being tested at peak times.

"Maintaining coordination with charging infrastructure planning is needed for sustained growth. We need to see a joined up approach that considers how many chargers are needed, what kind of chargers are needed and what the underlying power networks look like.” 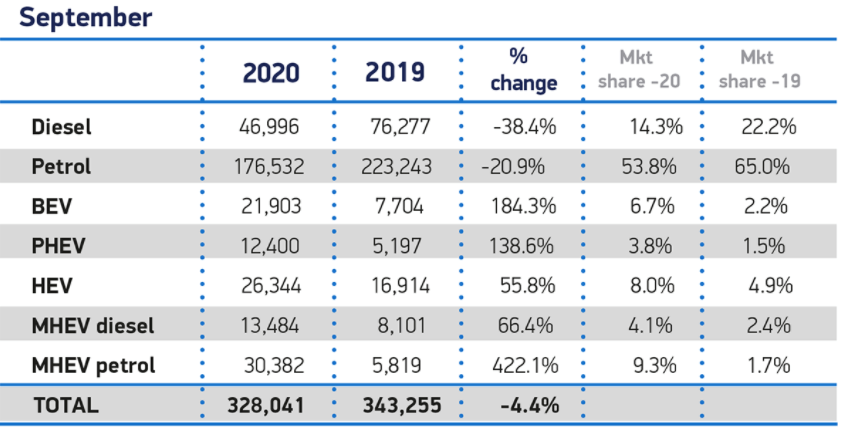 The SMMT has called on the Government to boost electric vehicle incentives and infrastructure by £16.7 billion in order to help net zero ambitions.

Plug-in car volumes increased by 121% in August, representing more than one in five of the total market, according to the latest figures from JATO Dynamics.