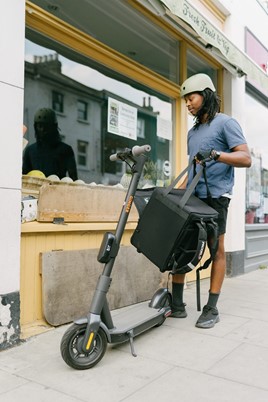 The UK could become the leading e-scooter market in Europe in two to three years, if the Government legalises their use, according to Paul Hodgins, CEO of shared micromobility operator Ginger.

Trials of rental e-scooters are currently taking place across 32 areas in England and the Government is not expected to make a decision on whether or not to permit the use of privately-owned e-scooters on public roads until after the trials complete next year.

Hodgins, of British-based Ginger, which launched the UK’s first pilot scheme with Tees Valley Combined Authority last year, says that the state of the law has “held back” market development and suggests if e-scooters are legalised the UK will become “the leading market” in Europe, overtaking countries where their use on public roads is already permitted such as Germany, France and Spain.

Hodgins believes the UK market is ripe for growth due to density of population and the need to reduce emissions.

“There are huge efforts in the UK to improve emissions, and that's happening at a national level and at a local level, so the push for that transformation is great,” he said.

“Once the law allows more councils to get into it then we really think this is the market to be in.

Hodgins suggests that micromobility as a whole – including e-scooters, e-bikes, e-cargo bikes and “emerging” small e-vehicles, which do below 20mph – will be a “major disruptor” in local transport and has the potential to account for 20% to 30%  of non-walking journeys in five to 10 years’ time.

“In ‘normal’, non-Covid times, people would take two non-walking journeys a day so in a town of 100,000 that’s 200,000 journeys and typically about 80% of those are taken by car, most are with one person in the car,” Hodgins said.

“So you’d be looking to serve anywhere from 30,000 to 50,000 journeys a day, potentially, with micromobility. And that’s where we believe it can get to.”

He added: “When people get on one of these vehicles they love it as a way to get around, and that’s important because it means that they will choose it.

“It’s inexpensive and it’s ‘clean’ at a time when there’s huge pressure on that.”

However, he warns that not acting quickly enough to introduce legislation could mean the UK doesn’t develop “a globally competitive, homegrown industry”.

“It can’t be another ‘Silicon Valley’ where we are great consumers here but the value chain and the network and ecosystem sit elsewhere,” he said. “That is the main risk we see in this country taking too long (to legalise e-scooters).”

Recognising that micromobility is one part of the wider transport system led Ginger to join Smart Transport, which facilitates relationships between senior transport public policymakers/advisers and the private sector transport mobility sector through networking, collaboration and the sharing of information, opinion and analysis in a neutral and confidential environment.

“Transport is connected,” Hodgins said. “Many journeys are multi-modal and you’ve got to make it easy and it’s got to work end-to-end and to work in terms of the cost,” he said, pointing out that consumers are not going to switch from private cars to more sustainable modes of transport if it “increases the end-to-end cost”.

“We’re very keen on working with companies on how to link in the last mile – or the last five or even 10 miles – with public transport or with car clubs,” Hodgins said.

“The other side is the technology involved – the electric vehicle charging points can be used just as much for micro vehicles as for bigger vehicles – and we are working with other companies on navigation and data.”

Ginger is primarily focusing on residents for its shared micromobility offering but Hodgins believes corporate customers could account for up to 20% of the company’s revenue in three to five years’ time.

It is conducting pilots for grocery deliveries in Richmond and Woking but Hodgins says there is also interest in corporate subscriptions and for parking bays for micromobility vehicles to be put in office car parks.

“Ultimately, what we would like to see is an offer where you come to a location and you’ve got a set of shared e-scooters, e-bikes and e-cargo bikes, depending on usage that is there,” he said. “That makes it more accessible for people and less expensive.” 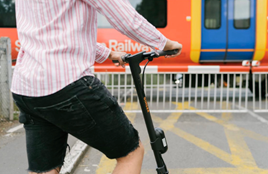 On the whole, feedback has been positive, according to Hodgins, although he acknowledges that a trial in Redcar was stopped after just a few months by the council.

Hodgins suggests that e-scooters must be introduced into towns in a “controlled manner”.

“I think some pilots have run into trouble where they’ve overwhelmed an area with vehicles right at the start,” he said. “We go in, depending on the size, with anywhere from 30 to 100 vehicles to begin with.”

Other controls include limiting the vehicle speed to 12mph (the legal limit is 15.5mph), a minimum rider age of 18 (the legal age is 16) and fixed parking locations.

“We don’t believe in dockless,” he said. “We believe in fixed parking locations and we believe in structure and that’s the only way to scale.”

If users try to end their ride and they are not at a parking location they will continue to be charged and Hodgins believes this mandatory approach is more effective than incentivising users.

Ginger is learning about where people want parking bays but also journeys in general – where they start from and what routes they are taking.

“These are connected vehicles so we have a live view of what is happening in a town or a city,” Hodgins said. “That’s incredibly valuable.”

Hodgins suggests that knowing where the vehicles are and who is riding them also means “we can enforce good usage”, alongside educating riders about how to use e-scooters and how not to.

“In a number of trial areas, the police start out a little bit sceptical, thinking that it’s another thing they have to enforce but once they work with us and see they can track where that vehicle has been and who has been on it they see there’s more ability to enforce anti-social behaviour on these vehicles,” he said.

Technology also has a role to play in addressing the safety issues posed to visually impaired people.

“We need to educate people about proper use but we are also working with technology companies on additional safety features that can be added to vehicles to create more accurate awareness for sight impaired pedestrians of what is around them,” Hodgins said.

“People are experimenting with the vehicles making noises, and we’ll see if that works practically.

“The tracking technology will also get better at identifying whether the vehicles are on the pavements or on the roads so we’ll have an ever improving technology to enforce proper ridership.”

Fewer than five serious incidents have been reported to Ginger, which, says Hodgins, “compares favourably to cycling”, and he urges critics to remember that “you have to be realistic about what happens on the roads”.

The Government has extended the end date of e-scooter trials until March 31, 2022, meaning it could be mid-2023 before any legislation permitting their use is introduced.