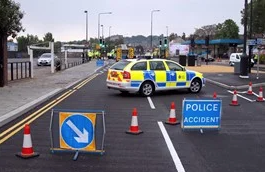 The UK has been highlighted as performing poorly against agreed EU targets of halving road deaths by 2020.

Deaths (provisional figure) actually rose in 2019 versus 2010, as did the number of seriously injured.

The Baltic States, together with Greece and Portugal, were the best performing countries in the EU according to a new report on the progress made reducing road deaths in Europe since 2010, published by the European Transport Safety Council.

Estonia now has a level of road mortality (road deaths per million inhabitants) comparable to The Netherlands.

France, Sweden and Germany have also shown “disappointing progress” over the last nine years with only modest reductions in deaths.

Bulgaria and Romania remain Europe’s worst performers in terms of road mortality and have also made below-average reductions in recent years.

The EU, and its Member States, agreed a target to cut road deaths by half in the decade to 2020.

With one year left until full data for 2020 are available, that target will almost certainly be missed.

That is likely to be the case even taking account of the significant drop in road deaths that have occurred in several countries in recent months as a result of Covid-19 lockdown policies.

Antonio Avenoso, executive director of the European Transport Safety Council, said: “While progress across Europe has disappointed over the last nine years, some countries have been quietly undergoing a road safety revolution.

“Overall, EU Member States will need to step up a gear to hit the new targets for 2030.  But the recent response to the Covid-19 epidemic may signal a way forward.

“A dramatic shift to walking and cycling in urban areas, combined with infrastructure changes and lower speed limits, could have a massive impact on road death and injury.

“But if we just revert to business-as-usual after this crisis, the results could be even worse than before.  There are danger signs already in the large numbers of speeding offences being reported as lockdowns are lifted, which only adds to the work of overstretched police and emergency services.”

Road safety in the EU is likely to see a boost over the next decade thanks to new legislation on minimum vehicle and infrastructure safety standards agreed last year.

But much will depend on the detailed technical standards for the new laws, which are currently being worked out.

ETSC is particularly concerned about the requirements for Intelligent Speed Assistance (ISA) technology for new cars, and “direct vision” standards (to improve visibility around the vehicle for drivers) for new Heavy Goods Vehicles, which both risk being “watered down” following motor industry pressure.