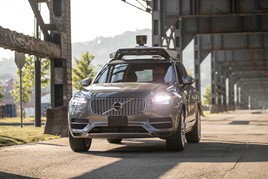 Uber has sold its self-driving technology unit to Aurora Technologies, but the two companies will work in partnership on autonomous development.

While Aurora will now be leading the continued development of self-driving technology with the addition of Uber’s Advanced Technologies Group (ATG), the ride-hailing company will remain linked after the deal is finalised in Q1 next year.

Uber is investing $400 million (£300m) in Aurora to continue self-driving development and the company said vehicles on the Uber app will use Aurora software “in the years ahead”.

While Aurora’s technology will eventually be used in Uber passenger vehicles, the first application will be focussed on the truck industry.

“For the last five years, our team at ATG has been at the forefront of this effort—and in joining forces with Aurora, they are now in pole position to deliver on that promise even faster.”

Khosrowshahi made no comment about why Uber itself did not want to continue leading development of self-driving technology.

However, since joining as chief executive in 2017, Khosrowshahi has been tasked with increasing profits at Uber and has focussed on taxi and food delivery services.

Uber’s self-driving technology was also involved in a fatal crash in Arizona in 2018.

An Uber back-up driver in a self-driving vehicle was charged with negligent homicide after failing to take control of the vehicle in an emergency and is awaiting trial next year.

Chris Urmson, co-founder and chief executive of Aurora, said: “With the addition of ATG, Aurora will have an incredibly strong team and technology, a clear path to several markets, and the resources to deliver.

“Simply put, Aurora will be the company best positioned to deliver the self-driving products necessary to make transportation and logistics safer, more accessible, and less expensive.”

Urmson said the team at Aurora is committed to “rigorous testing and has built a strong safety culture”.

He added: “With their technical prowess in both research and practical applications, ATG will strengthen and accelerate the first Aurora Driver applications for heavy-duty trucks while allowing us to continue and accelerate our work on light-vehicle products.”

Aurora was founded in 2017 by Urmson, who previously led Google's self-driving development.

Aurora is also financially backed by Amazon and venture capital firm Sequoia, among others, and tests its vehicles in the Bay Area, Pittsburgh, and Dallas.

The company has offices in those three cities and in Bozeman, Montana.

John Colley, associate dean of Warwick Business School and an expert on both tech unicorns and mergers and acquisitions, said the sale of Uber's self-driving unit is because the company is looking to stem the cash drain which this kind of development requires.

Colley said: "Having lost $6bn in the first half of the year, cash is starting to matter at Uber.

"Uber has around $6bn left, but the impression is that backers are starting to become impatient for profits and less willing to stump up more cash to support a story which struggles to approach profitability. There has been a clearing of the decks, disposing of other activities such as freight and bikes.

"However, the sale of the autonomous vehicle unit was not the success that Uber had hoped for, as the valuation slumped and the deal was for shares rather than cash with a partner which would be far from top of the list.

"Uber's hope now is to focus on making money from ride hailing and food delivery. That could take some time."

Uber will continue to operate in London for another 18 months at least after winning its appeal against Transport for London (TfL).

Uber, the ride hailing technology company, has said it will invest £200 million to help drivers switch to electric vehicles (EV).