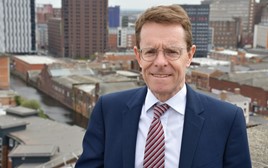 Transport for West Midlands (TfWM) is asking the public to have their say on its new strategy to decarbonise the region’s transport system and improve services.

The plan also builds on changes in travel behaviour seen during the coronavirus pandemic such as increases in cycling, walking and scooting and a reduction in five-days-per-week commuting.

It was developed following the publication of an open ‘green paper’ discussion document on the future of transport last year which drew almost 700 responses from across the region.

Five motives for change were set out for the new plan to consider; tackling the climate emergency, making streets safer, fairer access to transport, supporting the economy and encouraging more active travel.

“From improved cycle routes to new train stations, this investment will enable us to continue to connect communities as part of our transport revolution, as well as cut carbon emissions as part of our #WM2041 plan.

“Our draft Local Transport Plan is the guiding hand behind this and future investment, which is why it is so important residents have their say and make sure their views are heard.”

The draft LTP Core Strategy highlights how plans to further expand the Metro tram network, open new railway stations and invest in cleaner zero-emission buses through programmes such as the Coventry All Electric Bus City will make a difference.

However, it said these can take time to deliver and more also needs to be done quickly by using existing infrastructure in a better way to support behaviour change such as developing bus priority lanes and safe cycle routes.

The report says innovations and emerging technology such as autonomous vehicles, the growing 5G mobile phone network, better use of data, bus on demand services can all play a part in encouraging a shift from private cars.

While last mile transport such as e-bikes and e-scooters could play a part in reducing traffic and improving safety on local roads as well as improving health.

Key to delivering the the first phase of the plan over the next five years will be the £1.3bn City Region Sustainable Transport Settlement investment announced last month.

The money will be used to bolster the offer of “convenient and affordable” alternatives to the private car such as expanding the Starley Network of safe cycle routes, greater integration of bus, rail, tram and bike hire ticketing and more bus priority routes.

Cllr Ian Ward, WMCA portfolio holder for transport and leader of Birmingham City Council, added: “We cannot go on as we have with traffic congestion clogging our roads, high levels of pollution and poor air quality in our town and city centres. If we do nothing these problems will worsen and hold us back as a region.

“Cars don’t have to be the daily default choice for many of us - public transport and active travel are both better for the environment and can save people money.

“So, we have to make those alternatives more convenient and more cost effective and this local transport plan sets out some of the ways we can do that.”

It revealed 92% were either concerned or very concerned about the impact of climate change, while two-thirds thought busy local roads were a major problem preventing them cycling and walking.

The public consultation is running for eight weeks and residents and businesses can take part online here.

West Midlands 5G (WM5G) has developed a 5G-connected tram as part of a regional transport trial.