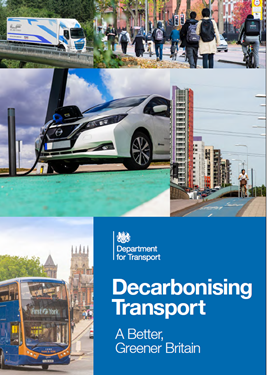 The Government published its long-awaited transport decarbonisation plan yesterday (July 14), setting out its commitments and the actions needed to decarbonise the entire transport system in the UK.

It also comes in the wake of the announcement of a 2030 ban on the sale of new diesel and petrol cars and vans (with hybrids phased out by 2035).

Much of the plan therefore repeats or builds on previous commitments. The biggest change is the proposed 2035 phase out date for new internal combustion engine (ICE) vehicles weighing from 3.5 tonnes to 26 tonnes and 2040 for vehicles weighing more than 26 tonnes (subject to consultation).

The rail network is set to be electrified by 2050, and there is a commitment for the domestic aviation sector to reach net zero by 2040 (subject to consultation), although critics have suggested there is not enough detail on how this would be delivered.

Other notable announcements in the plan are the launch of ‘Commute Zero’ in 2021, which will see the Government working with leading companies and large employers to change employee travel habits and support the take-up of lower carbon commuting, and a change to local transport plans, which will require councils to make quantifiable carbon reduction targets in order to secure funding.

Stephen Joseph, chair of Smart Transport and member of the Government’s Net Zero Board, which advised the Department for Transport on the transport decarbonisation plan, described the plan as “a big step forward”.

“It gives the industry a sense of what the overall pathway to decarbonising transport by 2050 looks like,” he said.

“However, the question will be how everything gets implemented and some of the really important decisions will be taken in the spending review in the Autumn and the cross-government net zero strategy.

“We need to see what those look like in practice. For example, the transport decarbonisation plan says cycling and walking schemes have a very high value for money, will that translate into more cash for active travel in the spending review?”

National road pricing is also a noticeable absence, although it is hinted at (the Government says that it will "need to ensure that the tax system encourages the uptake of EVs and that revenue from motoring taxes keeps pace with this change").

Joseph suggests much more needs to be said about the part Highways England, which manages the strategic road network in England, will play in decarbonising HGVs through putting catenary cables on the motorway network to allow HGVs to recharge.

John Armitt, chair of the National Infrastructure Commission, said: “Among all the pledges being made by Government and industry to help meet the net zero challenge, an end to the sale of the largest and dirtiest petrol and diesel trucks within 20 years would surely stand out as a significant step forward. In the same way the 2030 date for the end of new petrol and diesel car sales is focusing minds and investment, this can do the same for freight.

“It’s a welcome statement of ambition which the Commission first called for in 2019, and an unignorable signal that vehicles are turning right towards a greener future. We now need Government to work with regulators and industry on detailed assessments of the infrastructure required for battery electric or hydrogen HGVs at depots and along major freight routes, to enable the transition."

Smart Transport member CNG Fuels is sceptical about how quickly the market for electric or hydrogen HGVs can develop.

“Until something has been running on the road for between five to 10 years it is not deemed to be mass adoptable so I personally feel that the consultation on HGVs is far too premature,” said CEO Philip Fjeld.

However, full-electric commercial vehicle manufacturer and services provider Volta Trucks has called for “a greater level of ambition” from Government.

CEO Essa Al-Saleh said: “It’s disappointing that the UK Government hasn't been as ambitious as the French authorities, for example, who have banned diesel engine trucks from the streets of Paris and other large city centres by the end of 2023.

“This type of progressive legislation, twinned with incentives, is what's needed to accelerate the migration to zero emission large commercial vehicles.”

Smart Transport member Campaign for Better Transport (CBT) welcomed the “level of ambition” in the transport decarbonisation plan but Silviya Barrett, head of policy, research and projects at CBT, said that “technology alone will not be enough to reduce emissions at the level needed”.

“There will also need to be specific targets for reducing motor vehicle use to make the Government’s ambition a reality,” she said.

“Reform of vehicle taxation is long overdue and, if replaced with road pricing, it can help support the transition to cleaner vehicles and greater use of public transport and other green modes.”

Jenny Raggett from Transport for New Homes is sceptical about the effectiveness of the transport decarbonisation plan.

She said: "We welcome the positive language about getting people out of their cars onto public transport, walking and cycling. However, there is very little in the document that convinces us that this is going to happen.

“This is because this plan fails to analyse the mistakes that we are still making in terms of land use planning and the lack of resources to expand towns and cities around modern, integrated transport.

"From our many visits to new housing estates, we know that where these are built, how they are built, and what is financed in the way of infrastructure for an expanding area is critical to how people travel and use a place.

“At present we continue to see a worsening picture of car-dependency and of new road capacity to enable car-based lifestyles in the context of out-of-town development and sprawl.

“What is not clear from the Decarbonising Transport plan is how we will build something better in the future and therefore avoid our own car-based 'mini America' with the health and environmental issues that go with it. It's vital that the Government's upcoming planning reforms tackle this question."

Tell us your views on the transport decarbonisation plan

Do you broadly agree with the Government’s transport decarbonisation plan?

Let us know by taking part in our poll or leave a comment below.

In the middle of Covid-19 lockdown, the Department for Transport (DfT) published its Decarbonising Transport Setting the Challenge paper.