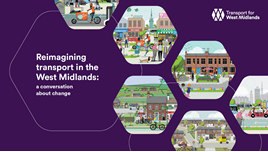 Transport for West Midlands (TfWM) has published a green paper to drive engagement with people, businesses and other key stakeholders across the region on what its new local transport plan (LTP) should look like.

Of these five motives, TfWM says the climate emergency is the most pressing. It has already set a zero-carbon target for the West Midlands by 2041, and published the first of four five-year plans.

This suggests a new LTP could have a much stronger focus on achieving transformational change within the next 10 years, rather than focussing on a longer-term vision and more gradual change.

TfWM says that this presents it with the opportunity to “rapidly reimagine transport to deliver transformative improvement in the lives of millions of people across our region, and for the West Midlands to demonstrate leadership in tackling global and local problems”.

TfWM intends to engage with the public and key stakeholders to shape its direction, particularly around difficult and complex decisions.

The green paper will be used to engage with four key groups using a range of techniques:

This will lead to a draft LTP with the finalised LTP due to be published in quarter four this year.

E-scooters, a demand responsive bus service and a car club will be trialled at the University of Warwick to change travel behaviour.

Transport for West Midlands (TfWM) has set up a pilot scheme in Coventry offering drivers £3,000 worth of mobility credits to scrap older, high emission cars.