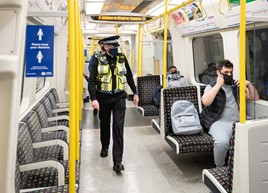 Transport for London (TfL) has said it is stepping up enforcement measures to make sure passengers on public transport are wearing a face covering.

Since 15 June, it has been mandatory for those using public transport to wear a face covering that covers their nose and mouth for their entire journey, including in stations and on platforms, unless they are exempt.

TfL enforcement officers have carried out 105,00 interventions since moving to the enforcement stage on July 4 this year.

Around 7,600 were stopped from boarding and 1,800 people removed from services.

TfL said fixed penalty notices are a last resort, but they are used where necessary – with around 400 fines issued by TfL officers to those refusing to comply.

TfL said that while there is around 90% compliance with the law, it is now ramping up efforts to penalist and prosecute the remaining 10%.

Last week, enforcement operations – which target people failing to wear their face covering properly as well as those without one - took place on buses, trains and at stations across London, including Stratford; Notting Hill Gate; King’s Cross; Bexleyheath and Stamford Hill, with the vast majority of people able to produce or correct their face covering, or having a valid exemption.

TfL uses information provided by bus drivers, station and other frontline staff about where there are issues of non-compliance, which it uses alongside other intelligence to determine where to deploy its officers.

Following new measures introduced by the Government, TfL and the police have powers to issue stronger penalties and to prosecute those more persistent offenders.

Siwan Hayward, Director of Compliance, Policing Operations and Security at Transport for London (TfL), said: “The vast majority of customers are protecting others by wearing a face covering properly unless they are exempt, and most people are very responsive when they are spoken to and will put one on or adjust it.

“But sadly, there is a selfish minority who are showing a complete disregard for everyone around them and who think it is ok to ignore the law.

“My message to these individuals is: you will be caught and face a hefty fine or prosecution. We would rather people were sensible and follow the law, but we will take enforcement action when we need to.”

Face coverings mandatory on public transport in England from June 15

Face coverings are now compulsory on all forms of public transport as of today (June 15).

Face coverings will become compulsory for everyone travelling on public transport and in taxis in Wales from July 27.