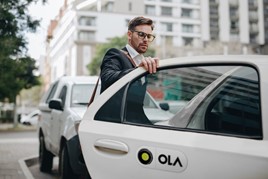 Ola, which started operating in the capital in February and launched a corporate offering in July, said it will appeal the decision.

It has 21 days to appeal and can operate in the meantime, according to the appeal rules.

TfL says that private hire operators must meet rigorous regulations, and demonstrate to TfL that they do so, in order to operate.

Before granting a licence, TfL must be satisfied that an operator is fit and proper to hold a private hire operator's licence.

Ola recently made TfL aware of a number of failures, including historic breaches of the licensing regime that led to unlicensed drivers and vehicles undertaking more than 1,000 passenger trips on behalf of Ola.

There was also a failure to draw these breaches to TfL's attention immediately when they were first identified.

Helen Chapman, TfL's director of licensing, regulation and charging, explained the reasons behind its decision. “Our duty as a regulator is to ensure passenger safety,” she said. “Through our investigations we discovered that flaws in Ola's operating model have led to the use of unlicensed drivers and vehicles in more than 1,000 passenger trips, which may have put passenger safety at risk

“If they do appeal, Ola can continue to operate and drivers can continue to undertake bookings on behalf of Ola. We will closely scrutinise the company to ensure passengers safety is not compromised.”

In a statement, Marc Rozendal, Ola's UK managing director, said: "We have been working with TfL during the review period and have sought to provide assurances and address the issues raised in an open and transparent manner.”

"Ola will take the opportunity to appeal this decision and in doing so, our riders and drivers can rest assured that we will continue to operate as normal, providing safe and reliable mobility for London."

Ola's rival Uber has recently been granted an 18-month extension to continue operating in London after a Westminster court ruled in its favour at appeal.