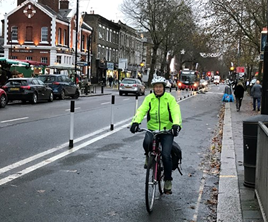 Transport for London (TfL), the Royal Borough of Greenwich and the London Borough of Hounslow have opened two new temporary cycle lanes totalling almost 5.5km of space as part of the Mayor’s Streetspace programme.

This builds on the 90km of new or upgraded cycle lanes that have been delivered or are under construction since May in response to coronavirus.

While the current coronavirus rules state that people must stay at home and avoid travel unless it is essential, TfL said it is important that as many of these essential journeys as possible are made by walking, cycling and public transport rather than by car.

It said this will help to cut congestion and pollution in the capital, while boosting people’s health and activity levels and reducing pressure on public transport while capacity is reduced.

The new route in Greenwich will make cycling between the Old Royal Naval College and Angerstein Roundabout much safer and includes a protected route through the Angerstein Roundabout, which is TfL said is one of the most dangerous and intimidating junctions in the area and was where somebody was tragically killed cycling in 2018.

Other improvements include new pedestrian crossings which provide a more direct route through Angerstein Roundabout for people on foot.

The new lane will form part of an extended Cycleway 4 (C4), which when complete, will connect Charlton and Greenwich to central London via Rotherhithe and Bermondsey.

In September, TfL opened the first section of the route between Tower Bridge Road and Rotherhithe, including an overhaul of Rotherhithe Roundabout and three new Santander Cycles docking stations along the route.

Will Norman, London’s walking and cycling commissioner, said: “Not only will these cycle routes enable many more journeys to be made by bike, which is vital to reduce the risk of a car-led recovery from the pandemic, but they also help ease pressure on public transport while social distancing continues to limit capacity.

“I’m particularly pleased that the notorious Angerstein roundabout has been made much safer for both people cycling and those on foot.”

Nick Fairholme, TfL’s director of project and programme delivery, said the new cycles lanes will make a difference to “thousands of people in the area and beyond”.

He said: “We’ll continue to monitor local roads to ensure the new lanes are working as intended.”

Enabling more people to walk and cycle safely is a vital part of TfL’s response to the coronavirus and will help London to avoid a car-led recovery from the pandemic.

Recent data published by TfL showed walking and cycling accounted for half of all journeys between April and June, up from 29%.

TfL is working closely with London’s boroughs on plans for the next phase of its Streetspace programme, which is creating extra space across the capital to enable more people to walk and cycle safely while social distancing.

More than 90km of new or upgraded cycle lanes have been delivered or are under construction so far and 22,500m2 of vital extra space for people walking has also been created.

TfL and Halfords partner up to reduce cycle thefts

Transport for London (TfL) has partnered with Halfords to offer a 15% discount on own brand locks to help reduce cycle theft in the capital.

Transport for London (TfL) is urging passengers to walk and cycle to try and ease the numbers returning to public transport as the second lockdown lifts today.