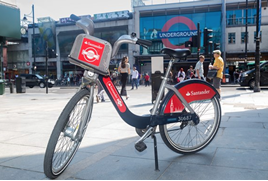 Transport for London (TfL) is celebrating a decade of cycle hire in the capital with more than 94 million hires since the scheme launched in July 2010.

Docking stations have more than doubled from 350 to 781 and over 12,000 bikes are available to hire.

TfL said cycling in London has more than doubled since 2000.

Santander has sponsored cycle hire across London for the last five years and the bank has supported key workers by offering free access codes for NHS staff during the Covid-19 pandemic.

More than 85,000 new members have signed up to the scheme since March this year – a 200% increase on the same period last year – contributing to more than 2.3m hires throughout May and June.

Previously, the scheme had never surpassed more than 50,000 hires on a normal workday, a record that has now been broken 13 times over the last seven weeks.

Throughout the pandemic, Santander Cycles has supported more than 60,000 free journeys since the NHS offer was made available in March, with the most popular location for code redemption close to St Thomas’s Hospital.

Throughout 2020, TfL and Santander are awarding a free annual membership to a dedicated cycle hire user each month, naming a bike in their honour.

Sadiq Khan, the Mayor of London, said: “We are determined to ensure that the capital’s recovery from coronavirus is healthy and sustainable – enabling more people to cycle is absolutely central to this.

“London’s cycle hire initiative has been a fantastic success story and over the past decade we have seen this flagship scheme go from strength-to-strength.

“We are delighted that this summer there has been record-breaking demand for our Santander Cycles and we are capitalising on this by adding new docking stations, cycle hire hubs and bikes, which will make it even more convenient for Londoners to take to two wheels.”

TfL’s Streetspace programme is investing in more than 40km of new or upgraded cycle lanes, with 16,000 square metres of extra pavement space.

Transport for London (TfL) has started construction work on a 1.6km stretch of its 10km segregated Cycleway route between Tower Bridge and Greenwich.

Councils get new powers to monitor cycle lanes in England

Local authorities in England will have new powers to use CCTV to issue penalty charge notices to enforce cycle lanes from June 22.