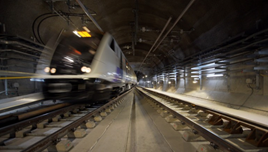 Transport for London (TfL) and the Government have confirmed an agreed £825 million finance package to deliver the final phase of the Crossrail project.

The deal between TfL, the Department for Transport (DfT), the Treasury and the Mayor of London will mean work on the railway can continue “at pace”.

Crossrail announced in August that it expected the Elizabeth line to open through central London in the first half of 2022 and that they would require funding beyond the agreed funding envelope.

The shortfall will initially be covered by the Greater London Authority (GLA) borrowing up to £825m from the DfT which will be given by GLA to TfL as a grant.

The Mayor of London, Sadiq Khan, said: “Securing this financing package enables us to press full steam ahead with getting the central section of the Elizabeth line open as soon as possible.

“The Government have insisted London must pay the shortfall - despite the overwhelming majority of the tax income that will result from Crossrail going to the Treasury.

“This is another example of London supporting the country way over and above the help we get from this government.

“I do not want this project to be stalled so it is vital that we dig deep to get the railway up and running.

“I will continue to monitor progress closely and do everything I can to minimise costs - helping ensure London and beyond can enjoy its many benefits sooner rather than later.”

Mark Wild, Crossrail chief executive, said the delivery of the Elizabeth line is now in its final complex stages.

Wild said good progress is being made on completing the remaining infrastructure works before operational testing begins “at the earliest opportunity in 2021.

Governance of Crossrail transferred directly to TfL in October, helping to simplify responsibilities and ensure decision making is seamless and fully aligned at this crucial stage.

The project remains jointly sponsored by TfL and the DfT and an independent DfT representative will attend the committee meetings.

When fully open, the Elizabeth line will increase central London's rail capacity by 10%, able to carry more than half a million passengers per day and will support new journeys through central London out to Essex and Berkshire.

Crossrail has been delayed again to summer 2022 and costs are expected to have increased by an additional £1.1 billion.

The leader of Havering Council has raised his concerns about further delays to the Crossrail project caused by a dispute between the government and Transport for London (TfL) over funding.