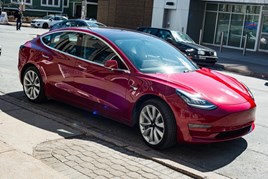 The ruling prevents the company from making references to the potential of its Autopilot driver assistance system that could mislead customers to think that the car can drive itself.

Autopilot combines adaptive cruise control and lane-keep assist with various other safety systems and can perform driving tasks for extended stretches with little or no human intervention, however it is not an autonomous driving system and the driver must remain in control of the vehicle at all times.

The case was bought by Germany’s Wettbewerbszentrale fair-competition group, which objected to claims on Tesla's website promising "full potential for autonomous driving" including “automatic driving on motorways”.

Matthew Avery, research director at Thatcham Research, said: “We have long warned of the pitfalls to the Autopilot system. Its seemingly competent performance can encourage drivers to hand too much control to the vehicle and lose sight of their responsibilities behind the wheel.

“This is a progressive process that begins when motorists are marketed the ‘self-driving’ experience.

“Autopilot is not a self-driving system. It is there to provide driver assistance, not become an invisible chauffeur.”

Avery said Tesla’s marketing frequently suggests the car is capable of ‘full self-driving’ and he highlighted that some UK Tesla customers recently received an email communication stating: “Our records indicate that you haven’t upgraded your Model S to Full Self-Driving Capability. You can upgrade now at a reduced price of £2,200.”

Tesla’s Autopilot system has repeatedly come under fire in the wake of numerous accidents that have occurred while the system was engaged.

In February, an investigation into a fatal crash involving a Tesla Model X being driven on autopilot in Mountain View, California, found that the driver was distracted using his mobile phone.

It was determined that the Tesla Autopilot system’s limitations, the driver’s overreliance on the Autopilot and the driver’s distraction – likely from a mobile phone game app – caused the crash.

The National Transportation Safety Board (NTSB) found that the Tesla vehicle’s ineffective monitoring of driver engagement was determined to have contributed to the crash.

Tesla's chief executive Elon Musk said the company is “very close” to making its cars capable of automated driving without any need for driver input.

“I'm extremely confident that Level 5 or essentially complete autonomy will happen and I think will happen very quickly,” he said at the opening of Shanghai's annual World Artificial Intelligence Conference.

Tesla Model 3 owners can connect to their car from anywhere

The Tesla Model 3 comes with an integrated 4G connection, meaning owners can connect to their car from anywhere in the world.

Ofgem has granted Tesla Motors with an electric generation licence that hints at its ambitions to expand as an energy provider in the UK.