Stellantis to invest £100m in EV production at Ellesmere Port 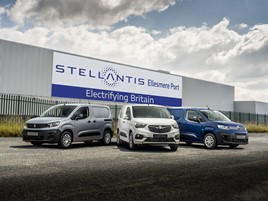 Stellantis will invest £100 million in Ellesmere Port to turn it into a dedicated facility for producing Vauxhall, Opel, Peugeot and Citroen all-electric vans.

The investment has been supported by the Government ahead its ban on the sale of new petrol and diesel cars and vans in 2030.

It means that from later next year the Vauxhall Combo-e, Opel Combo-e, Peugeot e-Partner, Citroën e-Berlingo and their passenger variants will be built at the plant, which aims to be carbon neutral by mid-decade.

It follows an announcement by Nissan last week to create a battery gigafactory at its Sunderland plant as part of a £1 billion investment.

Carlos Tavares, chief executive officer at Stellantis, said: “Performance is always the trigger for sustainability and this £100 million investment demonstrates our commitment to the UK and to Ellesmere Port.

"I particularly want to thank our highly skilled, dedicated workforce for their patience and contribution; we never let them down.

"Equally, I want to thank our partners the Unite Union for their open mind set and strong cooperation and, of course, the UK Government for their continued support.

"Producing battery electric vehicles here will support clean, safe and affordable mobility for the citizens. Since 1903 Vauxhall has manufactured vehicles in Britain and we will continue to do so.”

Kwasi Kwarteng, secretary of state for Business, Energy and Industrial Strategy, said: “Ellesmere Port’s proud tradition in auto manufacturing will continue for many years to come thanks to today’s investment.

"Stellantis’ decision to double down on their commitment to this site is a clear vote of confidence in the UK as one of the best locations globally for competitive, high-quality automotive production.

"Today’s decision will not only power Ellesmere Port into a clean future, but will secure thousands of jobs across the region in the supply chain. In this global race to secure electric vehicle production, we are proud to support Britain’s auto sector in this crucial transition as we work to build back better.”

The investment will go towards a new body shop, upgraded general assembly, a compression of the site area and the creation of an on-site battery pack assembly.

Stellantis has also announced the intention to consult on further investment into the Ellesmere Port site with the creation of a new UK parts distribution centre.

Nissan has announced plans for an electric vehicle (EV) battery gigafactory and production of its next EV in Sunderland as part of a £1 billion investment.