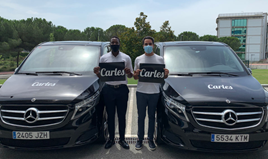 Shotl, the mobility platform, is taking part in the new Carles on-demand suburban public transportation service in Spain that looks to bridge the gap between private transportation and bus travel.

The new Carles service has been created in cooperation with the City Council of Sant Cugat del Vallè s, near Barcelona and the local transport company Moventis.

The trial started on July 10 with the aim to reinforce the existing bus network thanks to a fleet of four passenger vans providing flexible routes and connecting households to the town centre, shops and train stations.

Carles hopes to attract groups of two to four local commuters who live near each other or travel along the same route to take them between Sant Cugat and Barcelona.

A statement from Shotl said Sant Cugat is interested in exploring new ways to decrease the high volume of traffic that has been growing during recent years and which has been severely aggravated by post-lockdown.

Carles will interconnect all bus stops together in a demand-responsive way that’s not subject to schedules or fix routes.

The result is a “bus stop-to-bus stop” transport service supplied by vans that are able to feature higher speeds than the previous bus service, can guarantee a seat to every person, and provide “minimal waiting times”.

Shotl said: “Public transportation has become quite unsuccessful when pulling people out of their automobiles.

“This isn’t because we all have an absurd love affair with our car, but because conventional public transport is designed for the dense and concentric land distribution of large cities, which makes it inadequate to the distinct geography of smaller towns.

“To be beneficial in these environments, public mobility must be rethought to provide more of the advantages that we all get from the automobile.”

Go Coach and ViaVan have launched a new on-demand bus service in Sevenoaks to replace seven fixed-route bus lines due to lack of ridership during the COVID-19 pandemic.