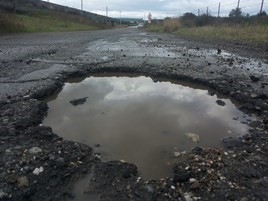 Transport Secretary Grant Shapps has accelerated plans to fix potholes and improve roads in a shake-up of transport infrastructure spending.

Shapps said the Government had taken advantage of quieter roads to complete millions of pounds worth of upgrades during the lockdown period ­– with more planned over the coming weeks and months.

The DfT said England’s motorways and major A-roads benefitted from £200m of work carried out in April while some £550m of improvements and maintenance were also completed on the rail network.

Most of the cash has come out of existing budgets – including £500m from a £2.5bn fund to fix potholes from this year’s Budget and £725m from the Highways Maintenance Capital Block fund.

The package will target around 11 million potholes plus smaller upgrades to local networks, such as enhancing road safety at key locations, the installation of priority bus lanes, and the creation of projects to help lock in improvements in air quality experienced during lockdown.

Shapps said: “To help those who do have to use public transport or get out on the roads to do their jobs, we’ve been accelerating infrastructure upgrades to make sure that, as we gradually reopen our society, everyone can benefit from smoother and safer journeys with better connections for our future.”

The smart transport funding crunch. How will the Government make money from motorists?

How does the Government raise revenue from motorists in an era of electric cars, usership, autonomous vehicles and MaaS?

What are some of the alternative revenue-raising options in an era of electric cars, usership, autonomous vehicles and MaaS?