Self-driving trucks could be on UK roads by 2030, says Zenzic 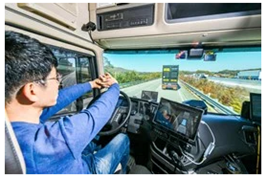 The UK logistics industry could be revolutionised by self-driving trucks within 10 years, according to Mark Cracknell, head of technology at Zenzic.

Created by Government and industry to champion a connected and self-driving environment in the UK, Zenzic is investing £200 million in a variety of programmes with the aim of making autonomous vehicles (AVs) a reality.

The benefits of AVs will include safer roads, said Cracknell. “By replacing human drivers with automation, we will harness the ability to vastly reduce the number of serious incidents,” he said.

Citing figures from the Department for Transport (DfT), Zenzic says that more than 85% of road incidents are attributable to human error.

However, a study released in May by America’s Insurance Institute of Highway Safety (IIHS), found the perceived safety benefits of AVs could be significantly lower than commonly believed.

It claimed self-driving vehicles might prevent only one-third of crashes if automated systems drive too much like people.

The trucks Cracknell is referring to will feature Level 4 or Level 5 technology according to classifications set out by SAE (Society of Automotive Engineers) International.

Level 4 will enable them to drive themselves in geofenced areas. Level 5 will make them completely autonomous, and capable of journeying from one location to another – a warehouse to a supermarket, for example – without any human intervention at all.

Such trucks could be deployed during off-peak hours from 2028 onwards, leading to their appearance during peak hours by 2030.

The percentage penetration of the truck parc is liable to be higher, he suggested, and autonomous vehicles are likely to be concentrated in certain regions of the country; areas where the layout of the road network and the investment made in it lend itself to their use.

Before this happens, the UK Connected and Automated Mobility Roadmap to 2030 compiled by Zenzic will have to be rolled out successfully.

“It’s a tool for decision-makers, investors and policymakers for our mobile future,” Cracknell said.

Businesses and organisations providing input into its creation include Bosch, Highways England, Transport for London, the Advanced Propulsion Centre and Coventry University.

“More than 150 organisations and upwards of 250 individuals are contributing to its development,” continued Cracknell. “We’ve been working with the Freight Transport Association (now being renamed Logistics UK) to help define policy.”

Areas being addressed include the transmission of V2V (vehicle-to-vehicle) data and the introduction of platooning – likely to be commercially available from 2026 onwards – which should lead to more efficient use of the road network.

Not all truck manufacturers are convinced by platooning’s benefits however, especially when it comes to cutting fuel consumption.

Many of these ideas were outlined in a recent webinar entitled Autonomous Freight Ahead! held in conjunction with the Department for International Trade.

Urban freight consolidation centres form part of the plan as does the introduction of an over-arching national freight traffic control system by 2027.

“It’s more about the consolidation and exchange of data than it is about control though,” said Cracknell.

Other changes will include a gradual move away from conventional road signs as the relevant information starts to appear on in-cab digital displays.

All these changes will need to be underpinned by a new legislative and regulatory framework along with the appropriate vehicle approvals.

Cyber resilience and digital security will be given top priority, he stressed. “They represent the biggest of the golden threads that run through the whole roadmap.”

While much of the interest in self-driving vehicles has centred around cars, Cracknell believes the Covid-19 pandemic has caused the focus to shift to freight. “People are recognising that its movement is essential to society,” he said.

He also argues that the advent of semi- or fully-autonomous trucks will help solve the shortage of drivers and cut overheads.

According to Deloitte, up to three-quarters of the cost of operating a truck are associated with the driver in one way or another, so fleets could achieve potentially major savings.

A set of common standards, terminology and wider collaboration in the industry is needed to help advance the testing of self-driving vehicles in the UK, according to the results from industry consultation.