School run one of the 'biggest threats' to air children breathe 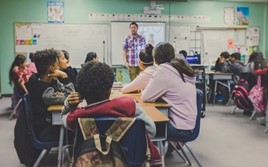 The school run “needs a revolution”, as it remains one of the “biggest threats to the air children breathe", says home-to-school provider, Kura.

Kura said the school run accounts for one quarter of all peak-time traffic and that data by Unicef found that children are disproportionately exposed to higher doses of pollution during the school run and whilst they are at school.

Godfrey Ryan, chief executive officer at Kura, said: “We now have further evidence that diesel-related air pollution is linked strongly to respiratory illness that is bad enough to see the GP, particularly among children.

“Unfortunately, COVID-19 will only make the situation worse, with a significant increase in car usage on the daily school run due to infection fears.

“Subsequently, calls for schools to do more to drive an environmentally friendly school run have been driven by increasing demands from pupils and parents.”

Ryan said that home-to-school transport "needs a revolution”. He added: “School leaders should be exploring new ways to encourage and facilitate alternative forms of school travel, such as through shared transport, with the overall goal being to reduce car usage and help make the school run more environmentally-friendly.

“With the right technology, practices and partners in place, Kura truly believes that a completely green, zero-emission school run could be a reality in as soon as five to seven years, without compromising other crucial areas, such as pupil safeguarding, and saving increasingly-stretched school budgets.”

In the report, staff and students described how they could ‘taste and smell the traffic at school’.

The UK needs to introduce legally binding air pollution targets based on World Health Organisation (WHO) guidelines, says a coroner's report on the death of nine year old Ella Kissi-Debrah.

Last year, a landmark inquest into Kissi-Debrah's death ruled air pollution was a "material factor" in causing and worsening the asthma attacks she suffered, leading to her death.

Kura manages a virtual fleet of 40,000 vehicles and works with schools across the UK on trips and transport tracking routes.

Transport & Environment (T&E) is calling for a new Clean Air Act after a landmark inquest into the death of nine-year-old Ella Kissi-Debrah ruled air pollution was a "material factor".