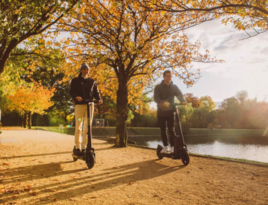 The DfT commissioned research of 4,046 adults aged 16 and over, carried out by Kantar in January 2020,  looks at public perceptions of e-scooters in the UK.

This project consisted of a nationally representative survey, telephone interviews and an online community in which participants completed a series of qualitative research activities.

Of those surveyed, 41% mentioned safety of pedestrians being their main concern, while 35% mentioned the safety of riders themselves.

Seven in 10 respondents mentioned at least one advantage of e-scooters, with key themes being environmental benefits (24%), speed (16%) and the fun of riding (13%).

Uptake of e-scooters remained low with 7% having ever used an e-scooter, and 2% using an e-scooter regularly or occasionally.

Under a tenth (9%) of respondents said they would likely buy an e-scooter if they were legal to use and a similar price to a bike.

A slightly larger proportion (15%) said they would be likely to hire an e-scooter in a town or city centre in the UK if this were an option.

Respondents were most supportive of e-scooters being legal to ride in cycle lanes on the road (60%). Just under one in seven (14%) of respondents thought that e-scooters should not be used at all in public areas.

The more respondents claimed to know about e-scooters, the more likely they were to report they would buy or hire an electric scooter (dependent on a change in the law).

The DfT said these findings will be used to feed into and shape the national e-scooter trials, which started on July 12, 2020.

Recent figures released by the DfT estimated there were 484 casualties in accidents involving e-scooters in Great Britain last year, including one fatality, 128 seriously injured and 355 slightly injured.

Think tank Centre for London has called on the legalisation of e-scooters to help reduce car use, cut carbon emissions, and improve air quality in the capital.

Micromobility operator Voi has said e-scooters are having a positive impact on modal shift, having replaced an estimated 370,000 car trips and saved 200 tonnes of CO2 emissions in the West of England.

The DfT is expected to use the e-scooter trials to help inform how it moves forward with future e-scooter policy in the UK.

The Government should legalise private and shared e-scooters and give Transport for London (TfL) the power to manage shared schemes, says Centre for London.

There were 484 casualties in accidents involving e-scooters in Great Britain last year, including one fatality, the Department for Transport (DfT) estimates.