Royal Mail calls for petrol and diesel ban for 2030 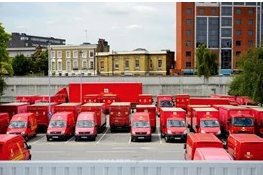 Royal Mail has joined the UK Electric Fleets Coalition, which is calling on the Government to commit to 100% electric vehicle (EV) sales by 2030.

The Coalition is organised by the Climate Group and Royal Mail operates the largest fleet of the nearly 30 businesses that are now calling on a new petrol and diesel vehicle ban to be brought forward to 2030.

Stuart Simpson, Royal Mail CEO, said: “I am really pleased that we are joining this coalition to help accelerate the transition to low carbon, electric fleets across the UK. Our ‘feet on the street’ network means Royal Mail already has the lowest reported CO2 emissions per parcel amongst major UK delivery companies.

“But, we need to go further. We want to become a net zero carbon business with a 100% alternative fuel fleet. We want to play a leading role on this agenda. To that end, we are committed to buying more alternative fuel vehicles for our fleet. We will work with this coalition to champion and enable the widespread implementation of charging infrastructure to make that happen in as many locations as possible across the UK.”

The Government has consulted on bringing forward the end to the sale of new petrol and diesel cars and vans from 2040 to 2035, or earlier if a faster transition appears feasible, as well as including hybrids for the first time. A decision is due soon.

However, the UK Electric Fleets Coalition wants the UK Government to target 100% zero emission car and van sales from 2030.

The Department for Transport (DfT) was expected to reveal its decision on when a petrol and diesel ban would happen in September but sources within the transport and energy industry claimed this was postponed due to the focus on the second national lockdown.

The industry will be hoping for further clarification from the DfT before the end of the year.

Ride-sharing company Lyft has joined EV100 after committing to switch 100% of the vehicles on its platform to electric vehicles by 2030.

Tesco, Dixons Carphone, E.On, Heathrow, Lime and SSE have joined the calls for Government to bring forward the new petrol and diesel vehicle ban to 2030.