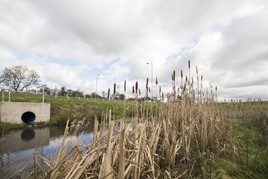 Highways England has launched a study into whether surface water which runs off roads affects the level of microplastics in the environment.

The Government company responsible for motorways and major A roads said it is committed to minimising the environmental impact of its network and in particular the vehicles using it.

It already has assessment and design standards for maintaining and improving drainage systems on its network.

Now it has kickstarted research to see if more can be done, and has just published initial research identifying what evidence exists and to determine what further research needs doing.

The findings have also secured funding to investigate the issue further through ‘on road’ investigations.

“We have undertaken this research together with the Environment Agency and other industry experts to better understand the potential contribution that road transport has on microplastics.

“The outcome of further research will be the evidence base to inform future decision making, enabling us to take positive action to manage identified risks, inform policy and identify further areas of research.”

The research for Highways England has been supported by the Environment Agency.

Helen Wakeham, Environment Agency deputy director Water Quality, Groundwater & Contaminated Land, said: “This research contributes to the work we do with partners to understand the sources and scale of microplastic pollution.

“We supported this research by Highways England as it provided a valuable review into the current knowledge of the potential scale of microplastic and chemical pollution from highways.

“This will help us better understand the contribution from the road network as a source of microplastics and emerging chemicals of concern entering the environment.”

Highways England decided to undertake research to identify whether there is a microplastic waste issue from water running off roads.

The research will help the company better understand the scale of this issue, the nature of the problem and identify any further detailed research to inform changes to its current policy or design standards.

Alice Horton from the National Oceanography Centre, said:  “This research is a key step in understanding the contribution of the strategic road network to microplastic pollution within the terrestrial and aquatic environment.

“This study has identified the critical knowledge gaps that should be addressed going forwards to enable us to understand the extent and implications of microplastic runoff from roads, and measures that should be put in place to limit this environmental contamination.”

Highways England is starting work on a £51 million upgrade to the A19 six months ahead of schedule.

Transport & Environment (T&E) is calling for a new Clean Air Act after a landmark inquest into the death of nine-year-old Ella Kissi-Debrah ruled air pollution was a "material factor".