Renewable energy could be supported by more vehicle to grid tech 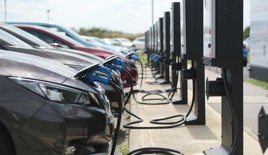 A renewable-powered grid needs a backup energy source for when the sun isn’t shining or the wind blowing. Traditionally, this may have been gas, but this is now less feasible due to a reduction in Russian gas supplies.

Aidan McClean, CEO of UFODRIVE, said: “The answers to this problem have always been numerous and obvious, if difficult to implement at-large; battery storage, efficient grid management, supply-side control, demand-side response, and pumped hydroelectric storage are all essential. We will need to use all of these en-masse to futureproof and green our energy grid.

“However, an obvious solution has been staring us in the face: if every EV battery by 2030 could plug into and power the grid or someone’s home, Europe would have more battery storage capacity than it could ever need.”

According to Virta Global, there will be 140-240 million electric vehicles globally by 2030, which means there will be at least 140 million batteries with an aggregated storage capacity of 7TWh, or 7,000GWh.

McClean added: “This still needs some work, however. At the moment, not all EVs offer a vehicle to grid option. For example, Teslas don’t yet have this capability and occasionally have declined to consider implementing it - as it could be argued that vehicle to the grid would compete with Tesla’s own Powerwall business. This must change if we want to achieve an effective net zero grid – we need unified technologies to provide solutions, not a spitefully fragmented market.

“As is so often the case – a lack of top-down policy, and a lack of care for universal accessibility by current titans of industry, is holding us back from an efficient V2G solution. We need clear, unified and brave public policy; and accessible and universal manufacturing standards; in order to embrace the technologies that are so clearly the answer to some of our biggest problems”.

A successful UK trial of Vehicle to Grid (V2G) technology connected the dots between an efficient, on-demand energy grid and the rapid uptake of electric vehicles (EVs), earlier this year. Drivers in Milton Keynes were given this technology, and at peak times were able to sell energy back from their cars to either power their homes or the grid at large.