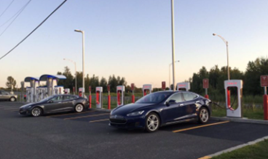 The Renewable Energy Association (REA) has set out its eight principles on how the Government’s £500 million Rapid Charging Fund (RCF) should best be deployed.

The Office for Low Emission Vehicles (OLEV) has been working to understand rapid charging requirements at Motorway Service Areas (MSAs) along the Strategic Road Network (SRN).

In May 2020 OLEV released a vision for 6,000 rapid charge points (~150kW+) to be deployed at MSAs and across the SRN in England, and in the Spring Budget Government sat aside a £500m RCF which will support electrical grid upgrades to facilitate this vision.

The REA welcomes this initiative and thinks targeting grid investments is an appropriate use of Government money.

In a blog post, the REA said: “The time, cost, and level of commitment required by charge point developers (and other stakeholders) to pursue large-scale grid upgrades often poses a major barrier to deployment and represents a market failure.

“The consumer experience of using the charge points supported by this RCF will be crucial, and as the programme of works is rolled out, ensuring a positive experience should remain front and centre as a priority.”

The REA has an EV Forum that is comprised of around 75 companies operating in the UK’s electric vehicle charging infrastructure ecosystem, ranging from charge point operators (CPOs) to installers, eMobility Service Providers (eMSPs), roaming and payments platforms, financiers, and equipment manufacturers.

As discussions are progressing within Government and industry around how the RCF should be structured, the REA thinks that the following principles should be adopted:

Aberdeen-based Trojan Energy has sacred £4.1 million in seed funding to boost its plans to roll out of its on-street flat and flush electric vehicle (EV) charging points.