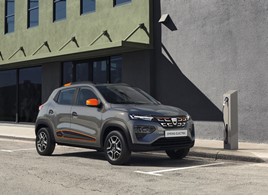 Groupe Renault is aiming to reduce its CO2 emissions by 50% compared to 2010 and is committed to achieving carbon neutrality by 2050.

The new ambitions coincided with the launch of two new electric vehicles that are due to go on sale in 2021 and 2022, one of which Luca De Meo, Groupe Renault chief executive, said will be "the most affordable electric vehicle in Europe".

This will come from Dacia, Renault's value orientated brand, with its new Spring Electric, that will first be launched with car sharing and mobility companies in Europe as early as January next year.

The Spring will also be launched with a Cargo commercial vehicle version aimed at urban businesses looking to swith to an affordable EV for last mile deliveries.

Groupe Renault will also launch an all-electric version of its Megane family hatchback by 2022.

Renault already has a partnership with Ferrovial, a Spanish service and infrastructure group and launched the Zity car sharing service in Madrid in 2017.

The new Spring Electric will join the Zity car sharing fleets in Paris and Madrid early next year.

Groupe Renault is also present as a partner of car sharing operators in 20 major cities in Europe and Latin America – Green Mobility across six cities in Denmark, Sweden and Belgium, Fetch in Amsterdam and Totem Mobi, which offers Twizy car sharing in Marseille and Montpellier.

"We are known in the car industry for our different revolutions, first with the Logan and then with the Duster which made the SUV accessible for all.

"The Dacia Spring will make inroads into three distinct markets: retail market, car-sharing with numerous car-sharer operators throughout Europe and on the last-mile delivery with its cargo version.

"The Spring will change the game as an affordable electric mobility solution for all.”

French town switches to all electric vehicles with Renault Zoe

The town of Appy in France has switched to all electric vehicles after Renault has provided its Zoe to all residents free of charge as part of a three year trial.

Car subscription service Onto (formerly known as Evezy) has ordered 1,100 Renault Zoes in one of the largest EV fleet deals in the UK.

Uber and Renault Nissan have signed a memorandum of understanding to provide electric vehicles to drivers using its app in Europe.