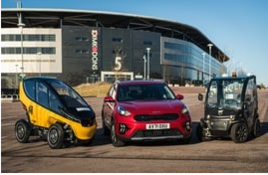 British start-up Imperium Drive has started its Fetch trial in Milton Keynes that will see remote-controlled driverless vehicles used as a car-hailing service.

The technology enables users to summon an unmanned vehicle via a smartphone app, which is driven by a remote driver to their location.

The customer then drives the car normally to their destination, from where a remote vehicle operator takes over and pilots the car back to base or to the next user.

Imperium Drive said for trips up to a couple of hours, the service offers the same convenience as a ride-hailing or taxi service, but with the ability to cover greater distances at less than half the cost of services like Uber or Bolt.

Koosha Kaveh, CEO of Imperium Drive, said: “For many people, public transport is cheap but inconvenient, while ride-hailing and taxis are convenient but also expensive.

“Our goal is to make on-demand door-to-door transport more cost-effective and convenient than every alternative, even privately owned cars.

“There are real environmental benefits too, with the potential to greatly reduce the number of private cars on the road.

“With Fetch, users hail a car to their doorstep and within minutes can be on their way, driving themselves to their destination in their own time and at their convenience.

“They don’t even have to worry about parking when they get there.”

Imperium Drive said for fleet operators in the car-sharing and short-term rental sector, remote driving can increase revenue per car as it allows them to relocate cars more quickly at periods of high demand, such as during rush hour, which is key to maximising utilisation rates.

Remote driving technology is already being trialled in other countries, but Fetch is the first application in the UK.

It features a variety of vehicle types including standard saloon cars to electric microcars.

The fleet is currently operating on private routes before the service is extended to include public roads in the next 12 months.

Imperium Drive aims to launch a fully operational remote-operated car-hailing service in the UK in the second half of 2022.

The company said the service represents the first step towards fully autonomous vehicles operating on UK roads, with the company aiming to transition to full autonomy for car deliveries in the next five years.