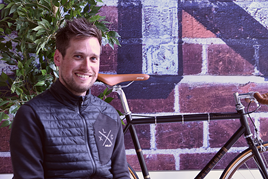 Raleigh UK, the bicycle and e-cargo bike manufacturer, is the latest member to join Smart Transport.

The company’s membership comes ahead of the launch of its new E-Cargo bike range in the UK and Ireland this month.

Lee Kidger, managing director at Raleigh UK, said becoming a member of Smart Transport will help the company collaborate with peers in the industry.

“We’re really keen to work with more local authorities and we were attracted to join Smart Transport due to the calibre of the private sector businesses already involved,” Kidger said.

“We want to engage more with those outside the bike industry and to collaborate with the private and public sectors on active travel and last mile delivery projects.”

Smart Transport membership facilitates relationships between senior transport public policymakers/advisers and the private sector transport mobility sector through networking, collaboration and the sharing of information, opinion and analysis in a neutral and confidential environment.

“Having a household brand like Raleigh UK as part of the membership will be a key asset in helping the industry collaborate and understand how they can boost active travel in cities and towns across the country.”

The UK’s active travel agenda was energised in July with the launch of the Government’s £2 billion Gear Change mobility package.

Part of these plans include rolling out thousands of miles of new bike lanes to help revolutionise active travel.

Kidger said: “The Gear Change launch creates a real opportunity to see if we can truly make that shift from looking at cycling as a mode of transport, rather than just for leisure.

“We’re looking at how we can assist businesses to look at how they approach transport and last mile deliveries.

“I think we could see a fundamental step-change in active travel in the UK and Covid-19 has keenly brought that into focus as people look at air quality and their health.”

Raleigh is looking at testing and trialling its E-Cargo bike range with local authorities in the coming months.

The E-Cargo bikes are designed to carry up to 100kg in weight and have a range of up to 75km (46 miles) on one single charge.

Funding was awarded to 18 local authorities in May, from the £2 million ‘eCargo Bike Grant Fund’ by the Energy Saving Trust.

Councils across England were invited to bid for up to £200,000 each to purchase e-cargo bikes for use by local businesses or deployment within their own fleets.

Kidger said: “We want to work with retailers and businesses to test and learn.

“We want to learn together and see what sort of last mile solutions could be put in place across urban city centre locations across the UK.”

Kidger pointed to Amsterdam as a good example of how a major city can better cater for cyclists.

He also highlighted Copenhagen in Denmark and Bremman in Germany as having forward thinking active travel infrastructure.

But what about the UK? “Cambridge has recently installed the UK’s first Dutch-style roundabout in July that gives priority for cyclists over cars,” he said.

“Brighton and London have also been investing well in their cycling infrastructure.

“I really want to see permanent measures in place to make cycling as safe and inviting as possible.

“Everyone that wants to ride should be able to.”

“The utopia is for people to think a lot more about that three-mile journey to the shop and to have the bicycle or e-cargo bike as an option they consider, rather than just automatically reaching for the car keys,” he said.

“We already work with the Bicycle Association to help give feedback to inform government policy, but I think there’s always more than we can do.

“It’s another reason why we’re keen to get the conversation going as part of being a Smart Transport member.”

Raleigh is launching a new electric cargo bike range called the E-Cargo in the UK and Ireland from September.

TfWM will invest £260 million as part of its new Starley Network that will establish 500 miles of cycling and active travel routes across the region.