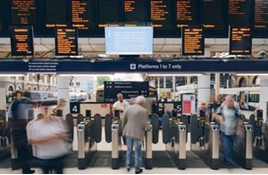 Rail minister Chris Heaton-Harris has announced a £5 million fund to develop a platform to open up rail data through a single-access platform to help improve rail travel for passengers.

The Rail Data Marketplace (RDM) is a collaboration between Government and the rail industry to provide the tools and frameworks allowing developers and tech companies to develop new services and apps to keep passengers 'better informed'.

As well as improving passenger journeys, the RDM will support the commitments in the Williams-Shapps Plan for Rail.

The Government said the RDM will allow passenger information to be acessed in one place, such as the availability of seats, detail on disruptions and availability of facilities including lifts and escalators.

Rail minister Chris Heaton-Harris said: "Sharing rail data like this opens up new and exciting possibilities for apps and websites that can make taking a train a smoother, quicker and better experience.

"Our reforms in the Williams-Shapps Plan for Rail will put an end to the fragmentation of rail data in the industry and unleash new opportunities that will support innovation and enable data to power the services of the future."

The platform is also set to support new real-time alert services, where the technology exists, such as alerting passengers about how busy a service may be or where the most accessible point of a platform is.

Simon Moorhead, chief information officer at the Rail Delivery Group, said: "Delivering the Rail Data Marketplace will build on the rail sector’s track record of opening up data to allow train operators, suppliers and new partners, such as tech companies, to innovate for the benefit of passengers.

"The Rail Delivery Group is pleased to be building this new service to make it easier for companies to sign up for rail data and work with the sector to open up new streams of information to help improve journeys."

The technology will also allow companies and developers to raise issues directly through the platform about which data they want to see.

"Today’s (June 30) announcement is a big step forwards and places the sector in an excellent position to move rail forward to match and even surpass other sectors such as air travel, in terms of the offer we can make to customers and clients.

"I am extremely pleased with the open collaboration across the supply chain, Network Rail, RSSB, UKRRIN and train operators and would like to thank Rail Delivery Group for their absolute commitment to delivering this initiative."

The Government said Transport for London (TfL) has previously opened up its data in a similar way, which has led to 'significant benefits' for passengers and the wider economy.

In 2017, an independent review of TfL’s open data found that over 600 apps were powered by TfL data, and used by 42% of Londoners.

In addition, the release of the data was found to generate annual economic benefits and savings of up to £130 million for travellers, London and TfL itself.

The RDM platform is set to launch next year following development of the technology and engagement with the sector and data consumers.

Government said the datasets made available through the RDM will continue to grow in number following its launch.

The William-Shapps Plan for Rail has been published and is set to integrate railways and deliver passenger-focused travel.

The Government has said it will “level up” bus and rail transport infrastructure across the Midlands and the North with £401 million in upgrades.

New national flexible rail tickets will be available to commuters across England next week.