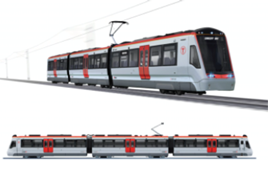 The Welsh Transport Commission has suggested using additional rail stations, rapid bus routes and cycle corridors as an alternative to the axed plans for an M4 motorway extension.

If implemented, the commission said over 90% of people living in Cardiff and Newport would live within one mile of a rail station or rapid bus corridor.

Plans to build a six lane 14-mile extension of the M4 that would bypass Newport in the South of Wales were scrapped by the Welsh government in 2019 due to environmental concerns.

However, the Transport Commission said peak congestion and commuting traffic on the approach to the Brynglas tunnels is a particular issue.

The South East Wales Transport Commission final recommendations report is calling for an infrastructure package to create a ‘rail backbone’ by increasing capacity and flexibility of the South Wales Main Line.

It also wants to transform access to the rail network by increasing the number of stations between Cardiff and the River Severn from three to nine.

It has also recommended creating rapid bus and commuter cycle corridors across Cardiff and Newport, connecting to the rail backbone and Cardiff Council’s public transport proposals.

The plans also include a ‘hub and spoke’ network of bus and cycle corridors within Newport city To integrate the network.

The commission also wants to introduce an integrated ticketing system across all services, organised through a cross-city zonal fare system.

In order to encourage people to use the network instead of commuting by car, the report said there would be workplace travel planning with large employers to influence commutes, there should also be flexible office hubs in major towns, cities and urban centuries to support remote working.

The commission is also considering introducing a workplace parking levy as the network is implemented to help persuade more to use the network.

To organise the network, the commission is recommending a transport governance package that will formalise a partnership of Welsh Government, Transport for Wales and local authorities to govern transport design and operation in South East Wales.

The report added: “This is an ambitious set of recommendations which will take time to put in place.

“Given the scale of engineering work, the rail backbone and new stations will take several years to deliver.

“However, it is feasible to deliver the vast majority of the walking, cycling and rapid bus recommendations within five years.”

Ken Skates, minister for economy, transport and North Wales said: “The Welsh Government welcomes the South East Wales Transport Commission’s report and the direction of travel it sets out towards a major upgrade of the south Wales mainline and better public transport along the M4 corridor.

"I’d like to thank Lord Burns and the Commission for a detailed and informed piece of work.

“As we outlined in our new Wales Transport Strategy, getting more people out of their cars and onto public transport is critical to our future and this report shows how that approach can relieve congestion around the Brynglas Tunnels and serve the economy and communities of the wider region.

"Newport Council has an important role to play in helping deliver the important shift this report sets out and we will work with them and UK government to take forward the recommendations in this report.

“As we have highlighted many times it will require the UK government to play their part and to adequately fund rail infrastructure in Wales.

"The report, built on a major upgrade of the south Wales mainline, is an important step forward and we hope the UK government will help us take advantage of the exciting opportunity it sets out.”

The Welsh government has said any transport review should be used as an opportunity to “put right” the UK government’s neglect of Welsh railways.