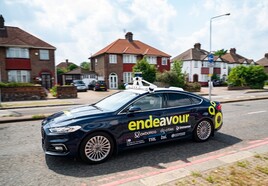 This was the first opportunity for public involvement in the project after Covid-19 restrictions prevented people from taking part in the Oxford and Birmingham demonstrations.

Members of the public were invited to make use of the cars as if making a journey along a route with stops. They were asked about their journey before and after as part of a road user behaviour study led by DG Cities.

The actions and interactions of people as they waited at the Endeavour trial stops, embarked and disembarked, and how other traffic users behaved around the AV were also recorded.

DG Cities is also conducting a national survey of public opinion about AVs and will publish the full findings in September.

Lucien Linders, general manager at SMLL, said: “ Ahead of the Endeavour trials, the UK public said that in-vehicle safety and the safety record of the service provider were the top two most important considerations when choosing future mobility providers.

"Our behaviour study is the latest opportunity to track changing public attitudes and reactions to AVs, and will inform how best to introduce AVs into commercial use on our transport networks.”

Christian Wolmar warns transport planners to beware of the hype around autonomous vehicles.

'Self-driving' vehicles to be allowed on UK roads this year

Self-driving vehicles could be allowed on UK roads by the end of the year, the Government has announced.