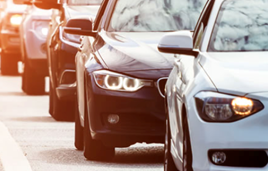 Ten organisations have written to Housing Secretary Robert Jenrick urging changes to the Government’s proposed planning reforms, which they believe will lead to a "tide of car traffic to already overcrowded roads”.

The letter, organised by Transport for New Homes (a project which Smart Transport chair Stephen Joseph is part of), and signed by Smart Transport member Campaign for Better Transport, along with other organisations including Living Streets, Sustrans and RAC Foundation, comes as the Government prepares for a Planning Bill to be announced in next week's Queen's Speech.

The organisations caution that new housing is being sited in places that cannot be served well by public transport, are inaccessible on foot or cycle and often have few or no local facilities.

In addition, the design and layout of many developments inhibit walking, cycling and bus service provision; some developments even have no pavements.

The Government's proposed reforms to the planning system do not address this, and threaten to increase car dependence, air pollution and carbon emissions, the signatories say.

The letter calls upon the Government to focus its planning reforms on reducing car dependence, by:

●     Revising the National Planning Policy Framework to give much more weight to developments around public transport and with good local services, and to discourage car-based developments.

●     Revising the housing targets system so as to locate more development in urban areas and close to public transport.

●     Making funding available, including through the Housing Infrastructure Fund, to support sustainable transport for housing rather than big new roads and junctions.

Jenny Raggett, coordinator of Transport for New Homes, said: “At present, sustainable transport is all too often treated as an afterthought or even ignored when new housing is being considered.

“Our on-the-ground research shows that this results in estates where people have to drive everywhere, because they have no alternatives.

“Future lifestyles are then built around the car.

“The Government’s planning reforms are an opportunity to address this and create attractive places for people to live with good public transport and local facilities that people can walk or cycle to rather than soulless car-based estates.”

"New housing should have basic amenities within easy walking distance and connectivity to employment, shopping and leisure by public transport, walking and cycling, creating healthier communities for generations to come."

Free Smart Transport webinar: Smart planning for the integration of housing and transport

Smart Transport is to host a free webinar providing expert insight into how the transport and housing industries are working together to make sure they use joined up thinking for future planning developments.

Large housing developments should contain ‘mobility hubs’ for transport as a condition of planning consent, Scottish ministers have been told.