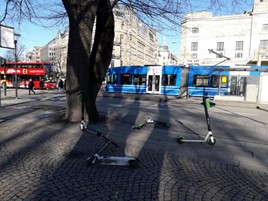 PACTS, the transport safety advisers to the Government, has said there are ‘few if any public benefits' to the legalisation of e-scooters in the UK and is opposed to trials of the micro mobility solution.

Use of e-scooters is currently illegal on public roads in the UK.

The Government recently announced its intention to hold trials of e-scooter rental schemes.

As a result of the Covid-19 pandemic, the timetable has been advanced and the Department for Transport (DfT) has said it hopes to have trials underway by the end of June 2020.

PACTS believes that trials for e-scooters will encourage more members of the public to start using them and “this will place the police in an impossible situation”.

PACTS is concerned that by bringing forward the timetable for trials, there will now be inadequate time for consultations to be properly considered or debated.

It said it would have expected to see an impact assessment and safety trials of e-scooters undertaken and published, in the way that would happen for motor vehicles or as undertaken recently for cycling infrastructure in London.

PACTS response to Government said: “From evidence and experience around the world, it is now very clear that the public benefits are illusory and the disbenefits substantial, at least in a European context.

“As such, e-scooters will work against many of the government’s objectives. PACTS therefore opposes the trials and wider legalisation of e-scooters.”

PACTS points to the growing evidence of the health and safety disbenefits of e-scooters and their “questionable environmental credentials”.

It’s own response to the Transport Committee's e-scooter consultation, which closed on June 2, said that based on research for other international markets, e-scooters are not being used as an alternative to car use, they are “bad for active travel” and PACTS believe they are not a safe mode of transport.

In conclusion, the PACTs response to the e-scooter consultation said: “We believe there are few if any public benefits in the legalisation of e-scooters in the UK.

“While trials of a hire scheme might seem a way to “test the water”, in reality they will let the genie out of the bottle.

“If the Government is determined to legalise e-scooters, we believe a proper and open examination of the evidence should be undertaken first, and construction and use regulations established in advance for private use as well as hire schemes, as happened with  electrically assisted pedal cycles (EAPCs).”

The full PACTS response to the e-scooter consultion can be read in full here.

The Department for Transport has extended its call for evidence on three core areas of future mobility as part for its Future of Transport regulatory review.

E-scooter and MaaS trials will be brought forward to help encourage more people off public transport and onto greener alternatives.