The Government has said that more needs to be done to promote sustainable transport as part of its plans to improve the links between Oxford and Cambridge.

In a new spacial framework document by the for the Oxford-Cambridge Arc, the Ministry of Housing, Communities & Local Government has suggested that “more needs to be done to promote sustainable transport, raise first and last mile connectivity around transport hubs, and better connect communities, employers, employees, businesses, cultural attractions, nature and universities, including through public transport, cycling and walking – making these the first choice for journeys”.

At Budget 2020, the Government committed to developing, with local partners, a Spatial Framework for the Oxford-Cambridge Arc – the area that spans the fve counties of Oxfordshire, Northamptonshire, Buckinghamshire, Bedfordshire and Cambridgeshire.

The Arc currently generates over £110 billion to the UK economy every year and "has the potential to become a world-leading and globally renowned centre for business, innovation and investment in a variety of industries, including AI (Artificial Intelligence), advanced manufacturing and life sciences".

The document said environmental outcomes for the area are “poor” and the risks of further harm are high, with regional level transport emissions responsible for 46.8% of total carbon dioxide emissions in the area, compared with 36.6% nationally.

This is driven in part by car-dependence, with 67% of the workplace population travelling by car, compared to 60% nationally.

The framework identified that east-west connectivity is particularly poor, with Cranfeld University being just seven miles from Milton Keynes but getting there by public transport involves a 45-minute bus journey.

Cambridge is further away – 45 miles – and can take nearly three hours by “a patchwork of buses and trains”.

This is driving up car dependency, which in turn is causing high and increasing congestion.

The East West Rail scheme, which links Cambridge, Milton Keynes and Oxford with a direct train line, will help to reduce car dependency.

However, the framework said: “If we want a better future, we need to plan for growth by thinking about the provision of infrastructure, housing, the environment and the needs of businesses and universities at the same time.

“We cannot continue to plan for transport, the environment and housing separately, or to think of economic development as separate from housing provision and commercial development." 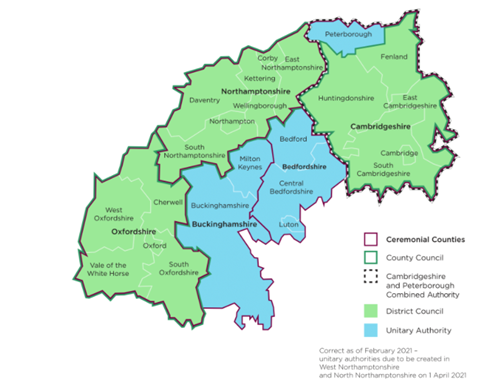 Why the time is now for sustainable mobility

Gilson Santiago, CEO of Masternaut and senior VP of fleet management for Michelin, discusses the role a connected fleet plays in sustainable mobility.

London in top three for Europe's for most sustainable transport city

London has been named as the third best rated city in Europe for its sustainable transport, according to new research from Uswitch.com.

An alliance of active travel, public transport and shared mobility groups are calling for the rapid reduction of private car use to help tackle air pollution.