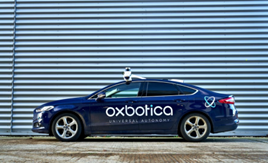 Oxbotica has paved the way for its expansion of its autonomous vehicle technology in right-hand drive markets after gaining approval to start public testing in Germany.

The official trials started last month on public roads near Friedrichshafen, with a fleet of vehicles navigating an urban environment.

To gain the AV permit recommendation, Oxbotica had to meet a rigorous assessment framework including detailed hazard analysis and the combination of physical real-world tests and scenario-based simulations.

Around two-thirds of the world’s population live in a country where cars drive on the right-hand side, including mainland Europe, the USA and China.

These present different situational challenges and road markings to countries like the UK, Australia and Japan, which drive on the left.

Having completed numerous trials on the left-hand side of the road in the UK, including on the complex streets of London, the German AV permit means Oxbotica’s automated vehicle software has now proved itself capable of following the rules of the road and driving on the right in real-world conditions.

This validation testing brings Oxbotica another step closer towards the international commercial deployment of its autonomous software stack on urban and rural roads.

Ozgur Tohumcu, Oxbotica chief executive, said: “The landmark TÜV SÜD AV permit recommendation in Germany allows us to test in one of the world’s leading automotive markets, helping accelerate future deployments both in the region and globally.

“Our ability to understand and adapt to the rules of the road for driving both on the left and right-hand side of the road provides a fast route to market for our autonomous vehicle software.

“It also paves the way to take our autonomous driving software internationally through the ongoing commercial engagements with our partners.”

Nadhim Zahawi, Business & Industry Minister said that ensuring self-driving vehicles can master streets around the world, as well as here in the UK, is crucial “in order to put the UK firmly in the driving seat of advances in autonomous technology”.

Zahawi added: “By testing these vehicles’ ability to drive on both sides of the road, Oxbotica’s public trials are opening the door to international markets and making sure that UK industry is at the forefront of innovation as we build back better from the pandemic.”