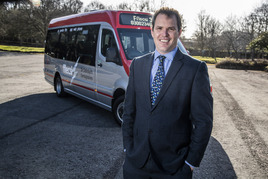 The Welsh Government has established the North Wales Transport Commission to review sustainable and integrated transport plans across the region.

During a visit to a new transport initiative in Denbighshire Waters announced the membership of the group and the areas it will focus on.

The Deputy Minister had the opportunity to see the electric powered Fflecsi bus first hand, which will provide a service in the Ruthin area.

Funded by the Welsh Government, it is Denbighshire’s first ever zero emissions 16-seat minibus.

In common with similar schemes in other parts of Wales, Fflecsi is a demand-responsive service, with passengers able to book their journey an hour beforehand. It will introduce a bus service for many people in Ruthin for the first time.

Waters said: “The new Ruthin Fflecsi bus service is an excellent example of what can be done to improve transport links in rural areas in a sustainable way.

“For many people, this is the first time they will have access to a bus service they can use from where they live, and provide a real alternative to using a car for journeys in the area.

“The North Wales Transport Commission will build on the great work already being delivered by the North Wales Metro programme such as this Fflecsi service, and consider the needs of all communities; both urban and rural, along the coast and inland.”

Waters said the new commissions will be based on the model used for South East Wales, which has been operating for over a year.

He added: “This is the opportunity to ensure that North Wales has the transport network which meets its needs for the future, and deals with the challenges we face with the climate emergency.”

Six transport commissioners have been appointed as part of the new group. They will provide recommendations to Waters next year.

The six commissioners are:

The Commission will be taking an evidence-led approach to produce recommendations that will help deliver a high-quality integrated transport system for North Wales, improving the way we travel while cutting emissions.

The conclusions of the Welsh Government’s Roads Review will form part of that evidence base for the Commission’s recommendations, which are due to be presented next year.

Motorists exceeding the 50mph speed limits on some of the most polluted roads in Wales could be fined from next Monday (October 4).

Transport for Wales partners with CitySwift on AI bus pilot

Transport for Wales and CitySwift have partnered on a pilot programme to optimise public transport services using data and machine learning.