York Hyperhubs to act as blueprint for city EV charging 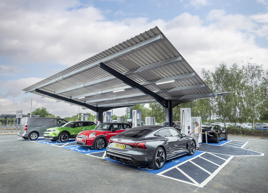 The Monks Cross HyperHub, next to one of York’s Park and Ride sites, opens today and is one of the largest EV charging hubs in northern England.

It features four 175kW ultra-rapid chargers, which can be upgraded to 350kW when more EVs can charge at this rate, four 50kW rapid chargers, with an adjacent area having thirty 7kW chargers for park and ride users.

The HyperHub also has a solar canopy which allows the site to generate its own renewable energy which can be stored in the Tesla Powerpack batteries at the charging hub, helping to reinforce the grid.

The ultra-rapid and rapid chargers are user-friendly for EV drivers thanks to contactless payment.

Cars and vans can access the chargers, and the facility has been designed with no kerbs to allow disabled access.

Protection from the weather is provided by the solar canopy and all of the electricity supplied from the National Grid will be generated by renewable sources.

In addition to the Monks Cross HyperHub, a second HyperHub is also set to open next to the Poppleton Bar Park and Ride site in the summer, and a third site is due to open near the city centre in 2022.

The projects are the result of a partnership between the City of York Council and EvoEnergy.

A key element behind the development of the HyperHubs was the production of an Electric Vehicle Charging Strategy by the City of York Council.

This looked at a wide range of issues in order to ensure that the HyperHubs met the needs of residents, fleets, commuters and through traffic.

The convenient location of the charging hubs was a central part of the strategy, with the first two HyperHub sites being located off the ring road next to established Park and Ride sites.

The Electric Vehicle Charging Strategy also identified that it wasn’t yet commercially viable for the private sector to develop such charging hubs, so the City of York Council would own its charging network in order to guarantee the best results for residents.

This allows the Council to plan how the network will grow and to set tariffs, as well as making it directly accountable and enabling it to deliver next generation chargers as quickly as possible.

The City of York Council successfully secured £1 million of European Regional Development Funding and £800,000 from the Office for Zero Emission Vehicles, along with £400,000 of the Council’s own capital funding to install the first two HyperHubs. This has resulted in 80% of the £2.2 million project being externally funded.

“Combined with GridBeyond’s management of the battery for participation in grid balancing services, the sites actually help to strengthen the electricity grid and will allow the latest electric vehicles - and the next generation of EVs - to charge in a hassle-free way, helping to reduce emissions from road transport in York.”

The 175kW ultra-rapid chargers mean that many of the latest EVs can gain 100 miles of range in 10 just minutes.

In addition to the 175kW ultra-rapid and 50kW rapid chargers at the Monks Cross HyperHub, the 7kW charge points at the adjacent site allow drivers to charge over a longer period of time if they are using the park and ride or if they are visiting the shops and cafes at the Vanguard Shopping Park.

Users of the HyperHub are able to benefit from lower prices for rapid and ultra-rapid charging than would typically be the case for non-subscription customers of commercial operators, in part due to the battery storage solution.

The York HyperHub charge points also have no minimum spend, and there’s no increase in the tariff for using contactless payment methods.

The management and optimisation of the battery for participation in grid balancing services is handled by GridBeyond, a provider of intelligent energy technology.

This way, it says, the hub will not only benefit EV users, but will also support the decarbonisation of the energy network by providing additional flexibility to the grid.