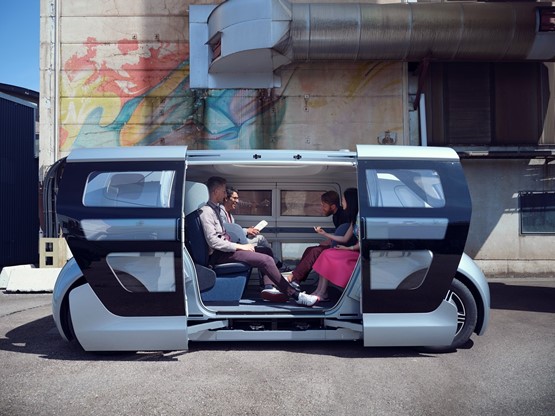 NEVs, which stands for National Electric Vehicle Sweden, was born out of the now defunct Saab, will have a core business model of ride hailing for its driverless vehicles, rather than offering ownership.

This is because NEVS believes there is no reason to own an autonomous vehicle because it can pick the passengers up from wherever they are and take them wherever they want to go in the city, “at a fair price.”

The first built version of Sango is currently being test-driven at the NEVS’ site in Trollhättan together with functional tests of the PONS mobility ecosystem.

Anna Haupt, VP mobility solutions at NEVS, said: "We started by looking at why urban citizens have such a strong desire to use their own cars rather than public transport, even if it means sitting in traffic jams for hours each day.

“The reason is privacy - in your own car you feel safe, secure, relaxed and free.”

NEVS has partnered with AutoX, an L4 autonomous driving technology company based in Silicon Valley and Shenzhen.

Haupt said that one of the challenges was combining the feeling of privacy in a vehicle with the concept of shared mobility.

One solution is Sango's interior which meets differing travel needs with three settings - private, social and family. Depending on which setting is selected, up to six people can travel in the vehicle.

Sango has six movable seats in three rows and is fitted with privacy walls that can be raised and lowered.

When raised, the vehicle is divided into four smaller areas for private journeys for up to four people.

In the social setting, the dividing walls are lowered to allow four people to travel together facing each other.

In the family setting, up to six people, seated in three rows, can travel together.

As well as the Sango vehicle, the PONS mobility system also comprises a user interface in the form of an app and a fleet management system which monitors and optimises the fleet of vehicles when it is operating throughout the city.

Haupt said: “Getting from A to B with self-driving electric vehicles is not as far off as perhaps the car industry is implying.

“The era of one person per car and the era of owning a car, are soon things of the past.

“A new era is coming, where cars are optimized for city mobility and better quality of life for the individual.”

The next step for NEVS is a pilot in Stockholm where a fleet of around 10 autonomous vehicles, known as robotaxis, will be used by the public.

Daniel Helldén from the Stockholm City Council traffic division comments on NEVS' plans for the Stockholm pilot: "Like other European cities, Stockholm faces challenges with vehicle emissions and traffic congestion.

“Therefore, we welcome new ideas that share our vision of a greener city with fewer cars."